The Miami Arena, as we knew her, is no more.

According to a story in the Herald by our Barry Jackson, the owner of the arena (who won it in an auction for $25 million a few years back), has already gutted the place and is going to demolish the building in the coming days/weeks.

Yes, Miami Arena was outdated the day it was opened. But we would never have had the Miami Heat had the place not been built, and certainly wouldn't have been given an expansion hockey team in 1993 without the old pink hatbox in Overtown.

Saw many great sporting events in the Arena during her short shelf life, from the Heat to Hurricane hoops to great concerts. I even loved going to see the Miami Hooters of the Arena Football League in their few years here.

For those who weren't down here back then, the opening of the Arena was huge. HUGE. Up until the opening in 1988, the only real concert venue we had in this area was the Sporto in west Pembroke Pines or the Marine Stadium in Miami.

The Hurricanes basketball team played at the Knight Center (basically a large auditorium) until the Arena opened.

Remember the rats? There were big ones running around the arena and rubber ones being thrown on the ice. I'll never forget seeing Bill Lindsay score that goal against the Bruins to win Florida's first playoff series, and the mob of people filing out of that place to celebrate. Then came the Flyers; then the Penguins. Will also never forget seeing Tom Barrasso (or forget hearing that derisive chant) as he hid in the net after a Panthers goal with rats raining onto the ice.

I got lucky and was able to work a bunch of those games for Fox Sports, and late in the playoff run, one of my jobs was rat duty. Was in charge of estimating how many rubber rats (and whatever else people tossed onto the ice) flew down by going by how many bags the Orkin guys had filled. Sneaking into Game 4 of the Finals with my Game 3 pass was also a highlight.

On a personal note, FIU had to hold our commencement ceremony at the Arena because of bad weather back in 1997. That was cool too. Oh, and the NBA All-Star Game. And Game 3 of the 1992 NBA playoffs when the Heat almost upset Michael Jordan and the mighty Bulls. How about the Heat-Knicks battles there? The NBA All-Star Game?

Four years ago, my friend Joe and I heard John Kerry was holding a rally at the arena. Neither of us are politically active, but decided this was probably going to be our last chance to go inside. We were right. I have some cool pics from that night that I will post later. I'm in Orlando and those photos are at home. 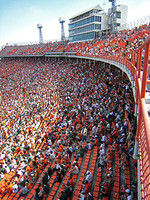 Miami is losing another obsolete friend. First went Miami Stadium, then the Orange Bowl. Soon, Fort Lauderdale Stadium will be put down.

At least we have our memories.

Below is a list of a few of my favorite Miami Arena moments. Make your vote. If you think I missed something, give me your candidate. If I agree, I'll add it. As always, comments welcomed.