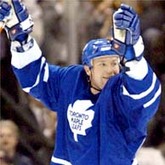 Word is, Bryan McCabe is coming to a town near you.

Here's what we got: Sportsnet.ca is reporting that Toronto d-man Bryan McCabe has agreed to waive his no-trade clause and "could be headed to the Florida Panthers.''

TSN.ca is reporting that McCabe is indeed headed to Broward County, once he gets paid the $2 million he's owed by the team on Sept. 1. TSN is saying that the deal is done; the players have been agreed upon and the deal will go down before training camp.

Jay Bouwmeester, as I wrote yesterday, is not part of this deal and isn't going anywhere. For now, anyway.

We'll see what happens, remember, these are just rumors (or for our Canadian visitors, rumours.)

Here is the TSN link; here is sportsnet.ca's link.

I spoke with JM this afternoon and he just kind of chuckled at my questions regarding this deal. He's not going to say anything until he wants it released. That's how he operates. But this deal passes the sniff test, and I think it's going to go down.

Here's the story I have running in tomorrow's editions of your Miami Herald.

The sad part of it is, as always, is who moves on. In this case, it looks like Mike Van Ryn will be leaving his adopted home and headed back to the Great White North. A class guy if there ever was one, Ryno will be missed down here. But, I would expect he'll be back at some point in his career, in some capacity

Van Ryn has made a home in South Florida, living in Davie with wife Amber. “This is my home now,’’ he said. “My second home is my first home.’’

When I spoke to Mike earlier this summer, he told me he had a feeling something might be going down, and said he would be surprised to be playing for the Panthers this season. Of course, it may not by Mike going north. But I think, with little doubt, he is.

In case you missed it, here's the story I did on Mike a few weeks ago. Of course, our website is pretty lax in the archive department. Believe it or not, to read a story I did on July 30 -- which has disappeared off the face of the MiamiHerald.com map -- I have to link to CBS' Sportsline.

And, thanks, CBS Sportsline...