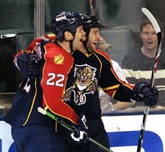 Just got word from the Panthers than Jassen Cullimore has accepted an invitation by the team to attend training camp on a professional try out.

Cullimore had a solid season for the Panthers last season after attending Detroit camp on a try-out basis. Cullimore was said to be asking for a salary in the $2 million range after last season's success, but apparently hasn't found anything to his liking.

This is a no-lose deal for the Panthers who have more than enough d-men as it is, although if injuries creep up -- or Jasen looks really, really good -- he could stick.

More than likely, this is Florida's way of thanking Cully for last year. He was a solid pickup by JM, and a tryout with the Cats gives him a chance to show other teams he can play. Last year, Cullimore sure showed he could still bring it. His three goals and 13 points were most since he was across the state with the Bolts in 2000-01 and plus-21 was best on the team.

-- Don't forget to vote for your favorite Panthers of all-time. Only a couple of more weeks to go until these polls close. Vote right here.

-- Different story here: The Big Bank will be hosting the National Lacrosse League on Jan. 3 when the Toronto Rock take on the New York SomethingOrOthers. How about some arena football? That could work down here. Lax? Not so much. If I wasn't covering the Panthers and out of town, I would probably show up and check it out. Have seen it on TV. Not bad.

Press conference next week at the Bank. Again, sorry I cannot attend.