« Panthers at the Ballpark (OK, Stadium) | Main | Fixing the Bank »

With training camps not to far away, must be time to talk about fixing hockey. And for many in Canada, that means bringing more NHL franchises north of the border.

Mark Moore writes at the Hockey News online site that "relocating teams from Nashville, Phoenix, Atlanta and South Florida to Winnipeg, Quebec City, Halifax and Southern Ontario would give Canada 10 teams, or one-third, just as it had in the Original Six era.''

No one can dispute the Canadian economy is strong and is all but fueling whatever growth the NHL is experiencing right now. But we're a long way away from teams in the lower 48 up and moving. Sure, a team may find its way to a suburb of Toronto in the next decade and there would be worse places to put a team than Winnipeg or Halifax (from a selling tickets point of view, not when it comes to travel.) But the NHL isn't pulling up stakes any time soon, unless it's to Kansas City or Las Vegas, American cities who either have a spanking new arena or are in the process of getting one.

Taking a team out of the U.S. and moving it to Canada isn't going to get the NHL on ESPN any faster, isn't going to help the long-term growth of this league in the States. The NHL hasn't given up on teams like the Panthers -- who do have plenty of problems but seem intent on figuring out a way to make it a go -- Thrashers, Preds and Coyotes. And they shouldn't. The game is growing in these places, only not as fast as some would like.

The NHL would be wise to continue showing patience in these markets. 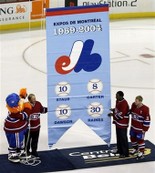 -- Speaking of Canada, the Canadiens are exploring the option of playing a game at Olympic Stadium in 2009. The former home of the Expos will need a lot of work, but the Canadiens have plenty of money. Talk is of opening the roof to have a true outdoor game. My pick to drop the first puck? Andre Dawson, Gary Carter, Tim Raines and Warren 'Call Me Homie!' Cromartie.

With the Marlins off, Dave Van Horne could call the game as well.

Don't think Jeff Loria and Dave Samson will be invited for the festivities.

-- Tarik El-Bashir at the Washington Post says the Caps are going to have a couple cool bobblehead giveaways this year featuring coach Bruce Broudreau and Alex Ovechkin. Hope those are on Panther night.

-- John Tortorella wasn't out of work for long, although he won't behind any bench this season. Torts, fired by the Bolts a few months back, gets to pontificate on the game for TSN for at least one season -- while the Lightning pay him for not coaching them. He'll be back on the bench next year.

-- Old pal Mike Russo goes to the practice rink and finds a bunch of NHL guys working out, including the Panthers' Keith Ballard. But Mike don't care about the Panthers no more (OK, that's not true), so he talks to Marian Gaborik about coming into the season with a one-year deal. Good stuff.