In Town, Not at Workout 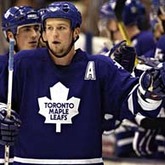 It's 10:24 a.m. in beautiful Coral Springs, Florida, and as far as I can tell, Bryan McCabe is still a member of the Toronto Maple Leafs.

Of course, that is expected to change any minute.

Coming to you live from Incredible Ice where a good number of current and past Panthers have taken to the ice for their daily workout. McCabe and Mike Van Ryn -- who will be traded for each other very soon -- are not here.

Word is, Bryan arrived in South Florida on Monday and was pretty busy on Tuesday. He's expected to join the informal workouts later this week.

-- One interesting tidbit gleaned from today's talks: Wade Belak has tossed McCabe's name into the ring for the team's vacant captaincy. Some may remember me writing last year that it may be best for Florida's next captain to be someone from the outside. I still agree with that. While Stephen Weiss and Bryan Allen are terrific leaders, it might be good to have a newcomer -- one with a solid veteran presence -- put that C on from the onset. My favorite remains Cory Stillman, but McCabe is an interesting option for the new coach to mull over.

-- Some guy named Peter DeBoer is getting ready for the hockey season. Me too.

-- According to one report out of Montreal, the Habs plan to retire Patrick Roy's No. 33 sometime this season during the franchise's 100 year celebration. Course, that's news to him.

-- Speaking of retired jerseys, the Capitals plan on honoring fan favorite Mike Gartner prior to a game against Toronto in December. Gartner was one of the early stars of the Caps, leaving the team as its leader in most offensive catagories. He'll now always be No. 11 in Washington.

-- Those of you who didn't stay up to watch the Tennessee-UCLA game last night really missed a classic. After a slow first half, things really picked up in the second, UCLA winning in overtime when the Vols miss a short field goal. Good stuff.