Welcome Back to the Barank...Mathias In....McCabe Still Out...Fun with Randy Moller 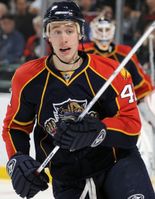 Live from the BarackAtlantic Center where the barricades are down, as are the political banners. Now, nothing left but ice, a lot of ads and a Celine Dion banner.

Bryan McCabe is on the ice participating in his first workout since injuring his back Oct. 10 in Carolina.

Matthias says he's excited to be back, says he looks at this as his NHL debut since the four games he played in last year were so long ago. He says he hopes to stick around a while, and if he plays well on this line, he might.

JM said he would speak to me before the game regarding injuries.

-- As expected, Tomas Vokoun in net tonight. Some of the Ottawa scribes ventured that Craig Anderson would play, and yes, he did stop 41 shots to beat the Sens last week. But, with the Panthers playing three games this weekend, if Craig started tonight, he would likely get two of three. And since he started the past game in St. Louis, that would mean your backup goalie starts in three of four.

So, we'll have Tomas in net tonight, probably Saturday in Music City with Andy going Sunday in Atlanta. On the west coast swing, you could map out Tomas in for Los Angeles and Phoenix, with Andy going in Anaheim (or he can get the start against the Jokinens.)

-- Bryan McCabe was one worn out looking dude after his practice today. The guy went hard. Took him at least 10 minutes to compose himself before he could talk to Craigervini and the FSN cameras. He was just beat. "I have to keep working hard to get my legs and my lungs back,'' McCabe said. "Riding the bike isn't going to do it.''

He knows his conditioning is going to get better on a daily basis and as long as his back holds up, he'll be OK in a few days. It appears he's going to keep practicing with the team, Pete DeBoer saying he's at least a week out -- two at the worst. The plan is for McCabe to come on the west coast jaunt, and possibly play on Thursday against Joe Torre and the LA Dodgers.

-- Wade Belak playing on defense today, still no Jassen Cullimore. Hope to get an update on that tonight as well. The Panthers' immigration folks are working hard on this one, you can count on that.

-- Tonight's game is on both FSN and NHL Network.

-- There will be no LIVE! updates from Nashville even though that game isn't televised. I won't be there to do it. Brian Costa taking over the beat for a couple of days. I'll be here today and tomorrow, back on top of things come Monday.

-- Don't know if you've heard, but there's a contest on Dan LeBatard's show on 790 in which callers suggest goal calls for Randy Moller. Pretty funny stuff. Last week against San Jose, Molls broke out "make me a bicycle, clown!,'' a line from the classic 'Wedding Crashers.' Looking forward to what comes up tonight.

My suggestion, from Animal House: "Congratulations Kroger, you're at the top of the Delta pledge class.''