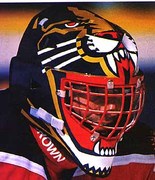 Since we're ending the Super-Spectacular Opening Night giveaway contest at noon Wednesday, I figured I would open up the voting early.

I do realize that Tuesday's question was misleading, as I read the Panthers' media guide wrong.

Tampa Bay did not play the last game at Miami Arena; Philadelphia did. But the Bolts did help open the Sunrise Arena (and was Florida's final opponent of the 1997-98 season).

Anyway, all answers -- even those of you who entered other teams -- were counted. Figured I screwed up, you shouldn't have to pay for it. So we'll just forget today's question ever happened, cool?

All of those who have entered so far have their names written on official entry sheets; the rest will be added tomorrow with the winning names pulled at a very special ceremony at the arena. The winners will be contacted by the Panthers and you will have fun on Saturday. I'll be working, but you'll have fun. You and all your good-timing pals. Enjoy yourselves.

So, once more, here is the prize pack:

- Four (4) tickets in the ADT Club (free food and drinks) for the Panthers' home opener at BankAtlantic Center on Saturday, Oct. 11 versus the Atlanta Thrashers.

Also, there is now a runner-up prize added: Two (2) tickets in the Club level for Saturday's opener against the Atlanta Thrashers. These tickets will be left at will call in the winner's name.

And, as asked, here are the RULES.

Now, here is our seventh "not real hard, especially if they are factually correct" trivia question:

"Name one of the two members of the Florida Panthers' 'Den of Honor'.''

HINT: Both players were part of Florida's 1996 Eastern Conference championship team. One was the captain, the other, well, this is easy enough.

Remember, this contest is open to folks 18 and over who live in the Tri-County (Dade, Broward, Palm Beach) area only.