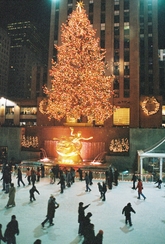 The Panthers held an open skate at the Bank today, with a big sale at the team store and the price of tickets slashed lower than Circuit City's sale on flat screen televisions.

It was advertised as an open house of sorts, although word was the Rangers weren't going to skate. Which was fine by me because I had a lot of shopping to do at Big Lots and left early anyway. They said there would be free food there, but that didn't happen either.

But if you wanted a Rangers jersey, the Panthers were happily raffling off one of those. Yep, just like a couple weeks ago when Detroit was here, the home team was giving away an enemy sweater.

Perhaps the person who won it is a Florida fan, and the free Blueshirt will swing him/her to become a fan of the Rangers. Hey, they haven't won anything since 1994, but, um, at least they've won something. Probably including two games this weekend against the Sunrise Six.

That said, it was good running into a number of fans who did come out. Thanks for coming up and saying hello. It was nice to put some faces to your screen names, although I'm sure you didn't enjoy putting this face to this column. Too bad for you.

-- It was nice of the Panthers to open up the arena parking lot for Sawgrass Mills overflow. Don't know if that was the reason, but a few smart folks I saw parked in the expansive lot at the arena and hiked across the street to the mall. Not a bad idea. Sawgrass looks slammed right now. Hope people are making some wise spending decisions.

-- Nasty Nick Tarnasky was on the ice for the skate this morning and said he's pumped to join the Panthers. Says it was tough for him adapting to the different teams and players in the west, but he knows the east after spending parts of the past three seasons with the Lightning. Didn't get to see Bryan Allen to get his reaction to Tarnasky now being a teammate. Let us hope time heals all wounds.

-- Here's what Nashville GM David Poile said about getting Wade Belak and his fists, courtesy of our good friend John Glennon at the Nashville Tennessean:

``When the opportunity arises, we’re always trying to get bigger, stronger and tougher, and with all due respect, we’ve now got a bigger, stronger, tougher player in Belak.

``We know that in players like (Scott) Nichol, (Jordin) Tootoo and now (Antti) Pihlstrom, we have guys that are going to be aggressive. Those guys forecheck and hit, and stuff happens. We need someone who can support those players, and we have the right player now in Belak to do that.’’

-- Tarnasky will likely be on a line centered by Shawn Matthias, the rookie not making it in for today's skate. He's in though, says Pete DeBoer.

-- Don't know if Nick Boynton's going to play tonight, and he walked out of the arena as we were talking to PDeB. Gametime decision.

-- Best wishes to old pal Olli 'Olli' Jokinen who could miss up to a month with an injured shoulder. Olli hasn't missed a game since he had a nasty bout with the flu back in 2002. Dude's a gamer, must really be hurt.