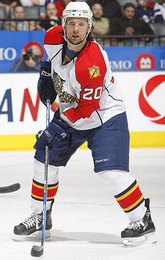 Bad news out of the Florida Panthers' 3-2 win over Carolina on Monday as Richard Zednik injured his left elbow after being run into the boards during the second period.

Zednik came out of the locker room Monday night with his elbow bandaged up saying it's going to be a while before he returns to the lineup. Pete DeBoer said it was a substantial injury, in that he would be out in terms of weeks.

Peltonen's shot apparently clipped Campbell on its way into the net. Couldn't tell on the high-def televisions (think 19 inch Sharps that ain't all that sharp) we have up here high above the Bank.

-- Wade Belak was back with his teammates tonight and was in the locker room after the game. He has a meeting scheduled with PDeB in the morning.

For those who want to go out to Incredible Ice tomorrow (I'll be smacking around some golf balls), PDeB says practice will start between 11 and 11:30. Team has a meeting at the Bank at 10 before they all head over there in a parade of luxury cars (save for Bouwmeester's Chevy truck and Booth's Ford Explorer) up the Sawgrass.