Shhh..The Panthers have a Hall of Famer 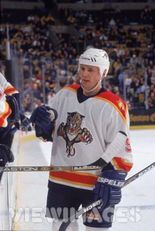 In case you didn't notice, and I'm betting many didn't, the Panthers had their first player inducted into the Hockey Hall of Fame tonight.

Sure, Igor Larionov didn't spend much time in a Florida sweater, but he still PLAYED for the Panthers.

Wrap your arms around that: A Hall of Famer who actually played for the Panthers.

He must of really ticked off the Panthers because, as hard as this is to believe, the franchise really whiffed on this one.

Congratulations to Mr. Larionov and his family for his official induction into the Hockey Hall of Fame on Monday.

One of the top Soviet players of his day, Larionov won three Stanley Cups with the Red Wings, but during the 2000-01 season -- which happened to be one of the worst in Florida history -- he scored five goals with six assists in 26 games before those hapless Panthers traded him back to the Wings.

Sure, the Panthers signing the 40-year-old Larionov as a free agent in 2000 was a mistake. And there is no doubt a team like Detroit, Toronto or Montreal wouldn't make a stink about a guy being inducted into the Hall who only played in 26 games for them.

Yet, as bad as publicity has been for this Florida team, one would think Larionov being inducted into hockey's hallowed hall would be worthy of something. Anything.

One would be wrong.

Not a single word has come forth from the Panthers regarding one of their alums getting into the hall. Perhaps it's because of the short time Larionov wore the leaping cat on the front of his jersey. But an alum is an alum in my book, whether he played in one game or 1,000.

For a franchise supposedly trying to sell the game down here, and this guy ain't sure they are, this was a major league error.

The Panthers' Den of Honor is a joke, everyone knows this.

But Larionov's HHOF induction gives the Panthers a chance to show this franchise DOES have a little bit of history and isn't afraid to honor it.

The Panthers have a chance to make this thing right.

Instead of just showcasing John Vanbiesbrouck and Brian Skrudland, the Panthers need to start honoring  members of the Hall of Fame with serious ties to the organization -- even if they didn't earn those stripes playing for the Panthers.

I'm not saying start retiring numbers, but expand that Den!

Put in Pavel Bure now. When Olli Jokinen says goodbye to the game, he goes in too (not saying he's a Hall of Famer, but he added a lot to the franchise in his years here). That's a no-brainer. Joe Nieuwendyk? In. Roberto Luongo? Done.

Others like Paul Laus and Scott Mellanby need to be given some cred here as well.

If the Panthers put hockey first, they might get more respect around the league, might turn on people in this market to their product.

If they don't start honoring THEIR game, they're always going to be the Panthers, a franchise on par with the Clippers (minus the occasional playoff appearance, of course) and the Pirates.

I'm glad Igor Larionov had the class to briefly thank the Panthers during his induction speech.

Perhaps one of these days the Panthers will get around to thanking the only Hall of Famer to ever don their sweater.