Sunday with the Florida Panthers ... More on Wade Belak ... Jassen Cullimore In, Cory Stillman Out ... Grey Cup: Montreal vs. Calgary 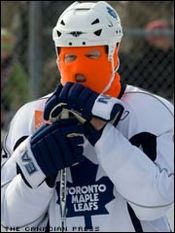 Watching the Miami Dolphins after another fine lunch at Pizza Time, ready to talk a little bit more about Wade Belak.

The Panthers will know where he's going by tomorrow afternoon, the deadline for him to be picked up off waivers is noon. He'll be picked up by someone, he's sure of it. He said last night's meal of sushi in Delray Beach was his "last supper.''

A few teams could use a bruiser like Wade, including the Panthers. That ship has sailed, however. Belak did say he hopes he doesn't get picked up. "My wife is crushed,'' he said. "We love it here. I don't want to go anywhere else.''

The move was not a popular one among teammates today. Many were visibly angry when asked about it, some offering some un-printable words. They all started with 'F.'

Wade is a very popular guy amongst his teammates, and the thought here is the move was probably more Pete DeBoer than it was Jacques Martin. Pete is the guy who controls the ice time, ice time that Wade was not getting.

Here's what Pete had to say today:

"I'm new and gave everyone a clean slate. We're almost 20 games in here to use as an evaluation period and we're not happy where we are. Tough decisions are going to be made. This is not a popularity contest.

"I don't think it's based on ice time. You make the most of what you're given. It's not good enough where we're sitting and there are going to be consequences throughout the lineup.

"Everyone has a job to do. I expect them to do the job they are getting paid to do. If you're not going to do it, you're going to sit in the crowd. Scorers have to score, fighters have to fight, checkers have to check. It's the old hockey adage. There has to be some accountability here.

"Listen, we're not sitting here where we're at because of Wade Belak or what Wade Belak hasn't done. But we're not happy where we at and there are consequences here.

Keith Ballard: "I like Belak and think he's real good for our team, real good for our room. He's a veteran guy who's been around a long time, so you never like to see something like that happen to a real good guy. Wade's an awesome guy, works hard every day. He has a tough job. He has to fight, and if no one wants to fight him, it's tough for him to do his job.''

If I hear anything else, you'll see it here. Keep checking in.

-- Jassen Cullimore's injured right knee looks fine, he was back out practicing today and should play tomorrow against the WhalerCanes. Talked to him Friday night in Boston and he was walking well so it's good to see nothing was serious.

"If he doesn't have the brace on, it's probably a worse injury,'' DeBoer said. "We missed him the other night.''

-- Cory Stillman is still being held out because of his concussion, Pete saying he's out at least another week.  "Concussion are strange animals and you never know what the recovery time is going to be,'' DeBoer said. "I know in talking to him that he's feeling better and will start doing some light exercising. He's at least a week away.''

-- Bryan Allen made a visit to practice today. He's still on crutches after having major knee surgery, and says he'll be on them for another month.

-- Rostislav Olesz is back and should play tomorrow. He was on a line with Kamil Kreps and Radek Dvorak.

-- Big football game tonight in Montreal as the Stampeders de Calgary battle the hometown Alouettes in the Grey Cup (Coupe de Grey). Game is on Versus tonight at 6, and this guy is fired up. Go Stamps!