Boston Bruins at Florida Panthers ... Rostislav Olesz Out ... Janis Sprukts In ... Anyone Left in Rochester? 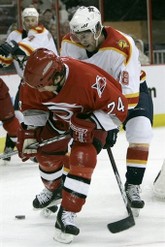 Rostislav Olesz will not play tonight, the groin injury he suffered in Thursday's win against Buffalo keeping him out against the Bruins.

Another player is leaving Rochester to join the Panthers, Janis Sprukts (four goals, six assists with the Americans) en route to sunny South Florida for the game.

Good news, though, on the injury front: Pete DeBoer says all five of the injured forwards will be on the trip to Canada, although all of them are doubtful for Monday's game in balmy Ottawa. Good for them. They can huddle around a fire to stay warm while the rest of us brave the Kanata winds.

-- Cory Stillman practiced today, his first full-on practice since he had his concussion setback against the Red Wings way back when. He says he feels good, but admits he's still a bit away because of his conditioning. Because he had a concussion, he hasn't been able to do much. But he'll be in uniform tonight for the pre-skate before heading back to the press box.