Big football game this weekend, with Buffalo-Miami week kicking off today in Sunrise.

Strange week. The Sabres are in Fort Lauderdale playing ice hockey; the Dolphins are traveling to Toronto to play football. Hey, at least they're not going to Kanata.

-- Not a whole lot going on at the skate today. PDeB says he's very happy for longtime friend Paul Maurice 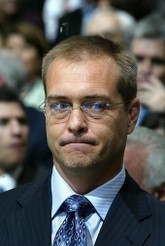 getting the Hurricanes gig. Says Jim Rutherford, also a friend of PDeB, is always thinking "outside the box" and making wise choices.

I like Peter Laviolette and thinks he got a bit of a raw deal. But he knew this day was coming if the WhalerCanes didn't get their act together. They didn't, and a good coach is out of a job. There will be offers forthcoming.

-- Hard to believe, but Washington's Bruce Boudreau is now the most tenured coach in the Southeast Division (although Maurice has more NHL wins than any of the other four have coached in NHL games combined). Boudreau was hired last Thanksgiving; since then, Jacques Martin, John Tortorella, Barry Melrose and Laviolette have been fired, with Atlanta's Don Waddell stepping down to hire John Anderson.

-- PDeB says he likes the effort from Kamil Kreps and Brett McLean, but these two need to start putting some pucks in the net. Yep.

-- David Booth will be in the television booth with Goldie and Denis tonight during the second period. Puck Daddy talked hunting with Booth during the Washington trip. Check it out right here...

-- NHL Network has a television crew following around Randy Moller today, part of their Voices series. Hope the Panthers get some goals for Randy to break out a good one. Something from Animal House, please. 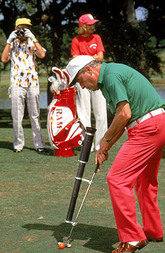 TaylorMade-adidas Golf and the National Hockey League's Florida Panthers are teaming up to present Panthers' fans with a 25-foot putting challenge at four home games in the month of December. Contestants will putt for a chance to win TaylorMade golf equipment.

The putting challenge gives fans an opportunity to putt with a TaylorMade TP golf ball emblazoned with a  uniform number of one of their favorite Panthers using a TaylorMade             Rossa® Monza® Spider putter, which was used to win twice on the PGA Tour in 2008. Fans can choose one of the following players' numbers: star defenseman Jay Bouwmeester (#4), assistant captain Cory Stillman (#61) or starting goaltender Tomas Vokoun   (#29).

The putting challenge will be held during each of the following home games at BankAtlantic Center:

-- And now, it's Name that Line time with another On Frozen Poll. Ville Peltonen, Gregory Campbell and Radek Dvorak have been playing great and probably need some sort of nickname. Don't know if we can come up with anything as clever as Sunrise Express, but who knows.

Seems like CPR is a big hit, although Goldie is breaking out 'Soup to Nuts' tonight on FSN, and he's sticking with it.

Any other ideas can be left below. Get voting!