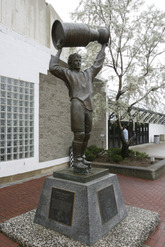 Panthers only got off 16 shots, but they played a tight game although they seemed to be hanging on for dear life for most of it. This Edmonton team has a ton of speed, and they peppered Craig Anderson with a ton of shots.

According to Pete DeBoer, the decision had been made and Tomas Vokoun goes tomorrow in Calgary. It's the right thing to do. If Vokoun took on 41 shots on the front end of a back-to-back night, Anderson would start.

Looks like Andy goes Sunday in Vancouver. Well, sounds like it. Andy said he was going to rest tomorrow, be ready to play if needed, "and get ready for Vancouver.''

So there you go.

Florida's defense, in my opinion, looks horrible. Statistically, that is. Realistically, they are saving the Panthers on a nightly basis. As good as Andy has been, his defense has been terrific and have been all over loose pucks and are just playing a good team game.

JM's goal was to fix the defense during the offseason and he did just that. These guys have been really strong (although FLA is giving up way too many shots on most nights) the past few weeks.

Oh, and Andy has stopped 95 percent of the shots he's faced since taking over to TVo on Nov. 26 against the Devils.

Here are some quotes:

''I think of regardless of how the game was going [Vokoun starting] was always the plan,'' DeBoer said. ''It's the right thing to do. Tomas deserves to play a game. From an energy point of view, we hope he can give us a boost.''

''I thought we played a good road game,'' DeBoer said. ''I don't look at the shot clock. They're a fast team. They've been off for four days so we knew they'd throw a lot of speed at us. A lot of the shots were from the perimeter. Craig handled the rebounds really well, and when he didn't, our six defensemen were terrific. They controled the game.''

"The one thing we did really well was clean up the rebounds and let me see the first shot,'' Anderson said. ''It helped the team get the win.''

"He was awesome and made it look easy,'' Stephen Weiss said of Anderson. ''He's still our best player.''

And now, here's my LIVE! coverage of Thursday's game. I kind of quit after the Panthers scored their first goal, late deadlines and all.

But I made my deadline by five minutes. My editors were thrilled.

Enjoy the replay of Panthers LIVE! at Miami Herald Hockey Central. Drive careful everyone, see you in Calgary.

LIVE! FROM EDMONTON BELOW:

For those of you who don't have Center Ice, you can't watch tonight's clash between the Panthers and Oilers from Rexall Place.

What are you waiting for: Get to Quarterdeck!

Or just hang out here. Going to do a little live blogging during the game, one that's about to get underway.

As we said here earlier, Mathieu Garon in net for the Oil, Craig 'Andy' Anderson going for the Big City Cats.

-- The CPR line gets yet another start tonight.

--Great save by Andy...also, Stephen playing well on both sides of the ice...

--Did you see what Carolina was doing to Philly tonight? 5-1 going into the third for the Canes. Guess that one's over, eh?

-- What? Philly scored four in the third and have tied it up? Whaaaaat?

--And in Pittsburgh, Pirates beating the Mets 8-1...New York needs to shore up that starting pitching....

--Tampa Bay about to get a much-needed win in Montreal...

-- Lot of cool banners up in the rafters here in Edmonton...got some names and numbers on one side, what look to be playoff banners of some type on the other. Have not seen a Celine Dion banner, but it could be hidden somewhere...

-- Two shots for the Panthers now....awesome!

--Just put JayBo on the jumbotron...mixed reaction for the home boy...

-- Panthers appear to be picking up the pace a bit here in the final two minutes...these teams better do something....crowd is asleep...

--Nice win for the Bolts...Barry Melrose is mad...

-- OK, looks like someone is going to throw with Ladislav Smid...he just hit Frolik in the back after he passed off the puck; Smid was jawing with the Florida bench as the period ended. Someone on the bench probably said 'what kind of name is Smid?' and he got ticked. Sure he's used to it.

-- Panthers going on the penalty kill, Dvorak in for tripping at 3:51...first penalty of the night for either side..

STEPHEN WEISS IS ON FIRE....WITH SHELDON SOURAY IN THE BOX, WEISS SCORES FROM THE RIGHT CIRCLE AS GREGORY CAMPBELL PLAYS BLOCKER...COMES ON 11TH SHOT WITH 5:04 LEFT...IT'S FLA 1, EDM 0...