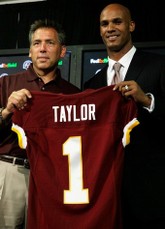 WASHINGTON -- The Panthers held a quick and painless morning skate at the D.C. Arena this morning, the Capitals allowing the early ice as they practiced at their facility in Virginia.

Kenndal McArdel is here and fired up for his NHL debut tonight. Looks like Noah Welch is the healthy scratch again tonight.

Not much going on, other than Shawn Matthias is centering a line with Kamil Kreps on the right wing. Michael Frolik and Rostislav Olesz are with Stephen Weiss on the top line. Here's how the Panthers will start tonight:

-- The Caps are a banged up bunch to. Tarik El-Bashir, a long-time Friend of On Frozen Pond (FOOFP), wrote about the Caps' ills here in The Washington Post. Good read.

Here are the guys out of the lineup today: Mike Green, Sergei Federov, John Erskine, Alexander Semin, Chris Clark, Jeff Schultz and Tom Poti. Lot of dudes on the DL.

-- Don't forget, today's game is radio only, so I'll be doing a LIVE! report from atop the Phone Booth starting sometime before 7 p.m. So go ahead and watch the Miami-Ohio State basketball game; I'll keep you updated on the hockey right here at Miami Herald Hockey Central.

-- Thursday, FSN gives us a new episode of Inside the Panthers, this show focusing on Richard Zednik. Here's the official release:

The next edition of FOX Sports Florida’s Inside the Panthers, profiles Florida Panthers forward Richard Zednik. In his 12th season playing professional hockey, Zednik has forged a solid career but was thrust into the international spotlight last season when he suffered a horrible accident on the ice. The upcoming show catches up with Zednik about his career highlights and he recounts that frightful night and road to recovery. Hosted by Craig Minervini, INSIDE THE PANTHERS: RICHARD ZEDNIK – ROAD TO RECOVERY premieres on FOX Sports Florida Thursday, December 4 at 6:30pm and replays multiple times throughout the NHL season.

A native of Banska Bystrica, Slovakia, Zednik was a 10th round draft pick of the Washington Capitals in 1994 and went onto play for them in the Stanley Cup Finals against the Detroit Red Wing his rookie season.  He later spent four seasons with the Montreal Canadiens where he posted a career best 31 goals during the 2002-03 NHL season.

Signed by the Panthers as a free agent prior to the 2007-08 NHL season; Zednik was on his way to a promising season but it was cut short by a horrifying injury on February 10, 2008.  In an away game against the Buffalo Sabres his carotid artery was accidentally sliced by a teammates’ skate.  Quick work by Panthers trainer Dave Zenobi, along with Sabres team doctors, helped avert a potentially tragic situation.

Fans will hear from those who saved Zednik’s life that fateful night in Buffalo, Sabres’ team doctor Les Bisson, and the head of emergency Medicine at Buffalo General Hospital, Dr, Robert McCormack, give their view of the procedures and practices that helped Zednik through the ordeal.  Also featured are former Washington Capitals teammate, Olaf Kolzig and current Detroit Red Wing, Marian Hossa, who played alongside Zednik for the Slovakian National team.