Shawn Matthias back with Florida Panthers 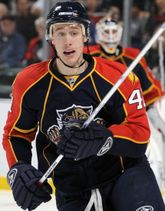 UNIONDALE, N.Y. -- There's a new Panther in town, and his name is Shawn Matthias.

The Panthers are light at center, and Matthias is on the way to help out. He's been recalled from Rochester and should be with the team in Long Island tonight and probably in the lineup tomorrow.

Matthias has three goals with an assist for the Americans in 34 games. Matthias has played in 10 games with the Panthers this season, recording an assist.

-- Panthers are trying to win their franchise record eighth December game. They've been stuck on seven since beating Nashville prior to the Christmas break. Islanders, on the other hand, have won once this month.

They beat Toronto on Friday, folks here started talking about them turning around their season but they've lost two more since then. And Rick DiPietro had another setback. Not a fun season on the island.