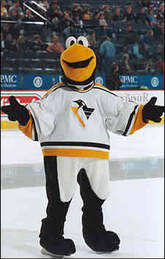 PITTSBURGH -- It's obvious the Penguins have hit a grand slam with their third jersey.

Bringing back the old-school Carolina blues for last year's Winter Class was a great idea; adopting them as a third jersey was genius -- although not very hard to come up with.

Anyway, the Pens will be wearing the blues today against the Panthers. Seems like nine out of every 10 fans have plunked down the money to buy their own as well. Again, genius.

When are the Panthers unveiling their third jersey? Oh....

-- Shawn Matthias was called up from Rochester today just in case Stephen Weiss couldn't go. Well, Weiss is in the lineup and so is Matthias. Nasty Nick Tarnasky sitting this one out.

-- Nathan Horton is back at center, running a line with David Booth and Richard Zednik. Other combos: Stillman-Weiss-Frolik; CPR; McLean-Matthias-Stewart.

Enjoy the game. The Fox crew is excited about being back at work.

-- Rumor is Dave Wannstasche is going to be here today. Will get a report from him if I see him.