Was hanging out with some friends in Pompano Beach last night, and started talking about hockey's newest, biggest thing: The Winter Classic.

I loved watching last year's game at Ralph Wilson Stadium in Buffalo, but this year's game at Wrigley Field was fantastic. I like the idea of staying in ballparks, but I would be cool with Penn State, Michigan or Ohio State football stadiums as well.

With the threat of NFL playoffs, I do think the NHL should stay away from them. Unless the Jets got their own stadium. Then you could hold it there every year. Or Cleveland Browns Stadium. Whatever.

Here are some of the places I think the NHL is looking at (and I'm not buying those Las Vegas/Los Angeles rumors at all): New Yankee Stadium, New Shea Stadium, Fenway Park, Michigan/OSU/Beaver Stadium, PNC Park (Pitt) and Citizens Bank Field (Philly). 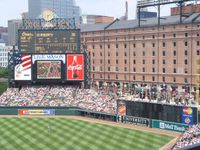 My idea: Camden Yards in Baltimore. Yes, I know Baltimore doesn't have a hockey team, but you put the Capitals and Flyers in there and you've got regional gold with a national appeal. Everyone loves the Caps, and the Flyers are a national draw.

I even like the fact that the game is in a non-NHL market. Makes the game look better. And crab nachos at Nacho Mamas in Canton for everyone. This would be a Winter Classic I wouldn't miss.

Feel free to discuss. On Frozen Poll NEXT!

-- Don't forget tonight's game starts at 7 p.m., not the usual 7:30. Game time was changed because TSN put in for a national game. They have that right.