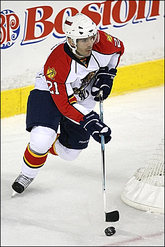 Cory Murphy is now a former member of the Florida Panthers, the 30-year-old defenseman picked up today off re-entry waivers by the Tampa Bay Lightning.

At least he isn't going too far.

Murphy has been waived twice by the Panthers, finally picked up when going through re-entry. This means Tampa Bay is only on the hook for half of Murphy's pro-rated salary (basically 25 percent of the $875,000 he's making this season).

Murphy is in the final season of a two-year deal he signed out of Europe at the end of the 2006-07 season.

In 57 games with the Panthers, Murphy had two goals and 16 assists. He missed ample time the past two seasons with shoulder injuries, his latest limiting him to seven games this season. He probably could have played in more, but the Panthers kept him on the shelf knowing he wasn't really needed. With Noah Welch, Florida has seven healthy defensemen, so Murphy was No. 8. 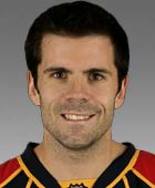 He spent two weeks with AHL Rochester before being recalled and subsequently waived for a second time. Murphy was also put on waivers at the start of the season, but the Panthers put him back into play when Bryan Allen and Bryan McCabe got hurt.

Hope to have something from Murph later in the day. Best of luck to him, he is one of the good guys in this league for sure. Don't know if he'll be in the lineup for Tampa Bay tonight against the Stars or not.

-- Pete DeBoer didn't give any specifics on Ville Peltonen's injured knee, but said he's out through the All-Star Break at least.

-- Nick Boynton didn't practice today because of the flu and will not play tonight. Welch gets a rare spot in the lineup.

-- Kamil Kreps is back, and he's centering the fourth line with Nick Tarnasky and Anthony Stewart. Brett McLean takes Peltonen's spot on the CPR line.