The Panthers held their final practice at Incredible Ice Tuesday before the All-Star break kicks in after Wednesday's game against the Dallas Stars.

First off, Ville Peltonen was back on the ice today, although PDeB says he's probably doubtful for tomorrow. The Panthers liked what they saw from last night's lineup and may not be willing to change things up just to rush Ville back into the lineup.

''I don't think he's ready,'' PDeB said. ''He has the heart of a lion. Pound for pound, he's as tough a hockey player I've ever coached. He just keeps coming at you. He takes hits, he's fearless in tough areas. You look at his size, he's playing against 220 pound defensemen on any given night. He's got a lot of respect from the people on the coaching staff and his teammates.''

Also, Nick Boynton was back after fighting the flu yesterday. He should be back in the lineup, although Noah Welch played well last night and could have put up a case to keep playing. It's a numbers game right now.

-- In tomorrow's Herald: More on the Panthers' shootout woes and some surprising reaction from players on the team. Stay tuned.

-- Also, don't forget to make Miami Herald Hockey Central your first stop during All-Star Weekend. I will be in Montreal starting Thursday night, with live reports and updates starting Friday morning from all around Montreal (including updates on what kind of doughnut I select at Tim Hortons. Will it be a Maple Dip or a Jelly? Will it be both? Check back and find out!)

Will have plenty of reports from your favorite players, coaches and whatever celebrities decide to make an 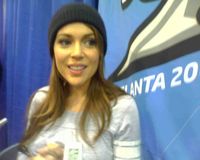 appearance. It's supposed to be pretty darned cold, so I'm not betting on many great celebrities. But whatever ones show up, you'll hear from them too.

Lots of stuff coming your way Friday, Saturday and Sunday. Hope you come back early and often. May even break out an On Frozen Poll or two just for good measure.