The gathered throng at Incredible Ice spoke to Jay Bouwmeester today about various things, from playing in the All-Star Game to his future in Florida.

As he has maintained all along, Jay says he hasn't looked that far ahead.

''I'm not going to make any rash decisions,'' he said.

For those not in the know, Jay has declined to sign a long-term deal with the team and instead agreed to a one-year contract during the offseason.

If Jay doesn't resign with the team, he can walk away as a free agent on July 1. There's a great debate on what the Panthers should do; obviously, the No. 1 thing is try to sign him. But if they can't, should the Panthers trade him, or risk it and try to keep on the team's best defenseman to try and make the playoffs for the first time since 2000?

It's a tough deal. We spoke with Jacques Martin about this last night before the Buffalo game, and he said he hasn't spoken to Jay's agent since they met in December when the team was in Canada. The team has until March to decide what to do. People love asking me what's going to happen, and I can honestly say I have no idea.

Anyway, back to Jay.

We talked about his thoughts on the South Florida market as it's been rumored he doesn't like playing here. He wouldn't say that, obviously.

But he did refute his father's comments in New Times a few months back in which Dan Bouwmeester said "They shouldn't even be in the NHL. It's not a hockey town. Why is it even down there?"

Says Jay: ''Don't listen to anything my dad has to say.''

-- On playing in hockey mad markets like Montreal: ''It's fun to play in places like that where there's more attention. But it's a two-way street. There are pros and cons to everything.'' 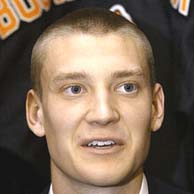 -- On helping make South Florida a true hockey market: ''Look at any place in the south where hockey isn't a natural fit to be here. Any kind of sport down here, it seems people throw you by the wayside pretty quick. That's just the way it is when you play in a market where people didn't grow up with [hockey]. If you can get kids coming out and playing hockey and enjoying it, well, that's all good.''

-- Can hockey end up working here: ''People think teams are just going to up and move. There are a lot of teams in the same situation in places where there isn't winter and kids can't just go out [and play] like in Canada. It's not natural, I guess. You can't just go around moving 10 teams and think that everything is going to be all good. Every place has its problems. That's just the way it is. I think it can work. You have to grow the game with younger kids. Time will tell. I can't predict the future.''

-- On Pete DeBoer: ''Yeah, it's been good. Everyone is optimistic and things like that. He's a good coach and we kind of have a young team and he's a younger guy, enthusiastic. He doesn't do things over the top, rants and raves. He works with guys and lets you know if you have to do things different. He does things real professionally. That's all you can ask for.''