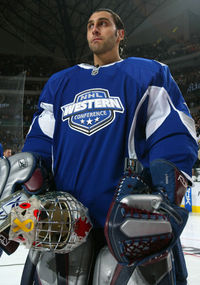 MONTREAL -- Just spoke with former Panther Roberto Luongo who is here representing the Vancouver Canucks for the Western Conference.

Louie grew up around here and says being back for the All-Star Game is quite special.

''Just the fact that it's in my hometown and there's so much history behind it really makes this special,'' Louie said. ''It's great to be able to play in front of my friends and family. I'm going to have quite a few here. I don't have the exact number, but at least 50 will be here.

''Anytime we play here is exciting. Given the fact it's an All-Star Game makes it even more exciting. You know everyone in the city is real excited about having the game here. I'm just trying to take it all in.''

I also asked Louie about his groin injury and how he's feeling:

''I feel real good, finally healthy and 100 percent. That was my main concern in coming back was making sure that I was good to go.. So far, all three games have been great. I'm starting to feel like myself with the time and everything. My timing was off a little bit, the reads. It's not easy to jump back into it after three weeks and pick up where you left off. The other night in San Jose I felt like I did before the injury.''

Part of the YoungStars Game last year as a rook, the Blackhawks' rising star is now part of the big game. He's pumped.

''Last year was pretty neat to be around all the guys and it was fun to be a part of the festivities. I wanted to be in the big game and it's nice to be part of the real team. Last year was fun, I was in a room with the top 40 players in the world. It was real neat, cool to be there. But this year is better, being in Montreal, part of the 100 years and all that. There's a lot of history here. It's going to be a fun weekend and I'm really looking forward to it.

''I wouldn't miss this. If I had an injury, I would play through it to be part of this.''