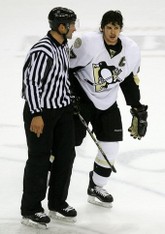 PITTSBURGH -- In what could not be considered to be shocking comments, a few Panthers had choice words for Sidney Crosby after Saturday's win (which could be considered shocking).

Florida beatdown the host Penguins Saturday afternoon in the Igloo, with Crosby mixing it up with Gregory Campbell before jumping Brett McLean in the faceoff circle late in the second period.

Crosby was slapped with four penalties that cost him all but the final minutes of the third period. Pittsburgh wisely kept Crosby on the bench after he came out of the box, although Florida probably wouldn't have fought him since it was so late in the affair.

Here's what happened: Moments after Campbell and Max Talbot fought a good fight, Crosby and McLean lined up in the faceoff circle. The puck was dropped, Crosby grabbed McLean and took him down, shaking and pulling him around the ice – with very few punches thrown.

McLean cut the bridge of his nose when he hit the ice, and Crosby was sent away with four penalties – including instigating and unsportsmanlike conduct. Crosby's fighting style has been criticized lately, especially after he repeatedly took below-the-belt shots at Atlanta's Boris Valabik last month.

After the game, coach Pete DeBoer and McLean didn't have much to say on the subject, but Nick Tarnasky and Nick Boynton sure did. Tarnasky's comments to me should be construed as off the record since we were just chatting during the second break, but Boynton went off as he finished getting dressed.

''That was just embarrassing. I can understand a little bit what he was trying to do, but that's a not a very professional move. You ask a guy to fight. You don't jump a guy when his head is down taking a faceoff. That's pretty immature and childish.

''He's just, whatever. He's not happy with the way things are going and he was trying to get his team going. But there's no need for that.''

Ever seen someone pull that?

''Not that embarrassing. That was, you know, that's not what the game needs. Whatever. We beat them where it counted and that's all that matters. We needed the points.''

''Obviously he was trying to spark his team. I've been in a few pretty poor fights in my day, so that just goes into another one of those.

''Last time I was in a fight was two or three years ago when I was in Colorado.

''He said something before the drop but I really didn't pick up on it. So, I kind of wish I had now. Like I said, everyone can understand what he was trying to do for his team. He's their leader, their captain.''

Said Crosby: "I asked him to go, and he said yes. And usually, yes means yes. I mean, I wouldn't have wasted 20 minutes in the box for that. I guess he didn't take me serious. I don't know, it wasn't worth 20 minutes, though, that's for sure."

DeBoer: ''I've coached Sidney and know what kind of competitor he is. If I'm coaching Pittsburgh, I like to see that kind of fire out of one of your best players when things aren't going that well. It is what it is. I was glad to see him off the ice for 19 minutes. That made our lives a little easier.''

-- Key Stats: Florida led 2-0 before Pittsburgh scored; Florida then added three goals (two on the power play) to close the second and lead 5-1 at the break.

Nathan Horton had two goals. Other players with two points on Saturday: Keith Ballard, Stephen Weiss, Bryan McCabe, Boynton and Cory Stillman. Richard Zednik and Ballard both plus-2. Florida was 2-for-7 on the power play; Pittsburgh's PP struggles continue as Penguins go 0-for-3. Pens are now 0-for-24 through past six games on the advantage.

-- One of the better lines of night delivered by David Booth to Craig Anderson: "Hey we had the same stats tonight.''