TERMINAL 1, FORT LAUDERDALE INTERNATIONAL AIRPORT NEAR HOLLYWOOD BUT QUITE POSSIBLY IN DANIA BEACH, FLA. -- Sitting around the JetBlue counter waiting on my flight to Nueva York for the big hockey game that's going down tomorrow on Long Island.

Pete DeBoer made it clear he's going to stress how important a win over the lowly Islanders is. He will remind them of the last time they were there, when Tomas Vokoun got mad and Nathan Horton scored a late goal in what became a 4-2 loss. That, you may recall, was the last of Florida's four-game losing streak.

Boy, have the Cats turned things around since then.

Since losing to the Palm Isles, Florida has gone 7-1-3, the seven wins second most in a January in franchise history.

-- In the 'If You Send It, I Will Post It' Department comes a press release from loyal reader Charlie Flowers of Hollywood by way of his sister (another loyal reader and critic of OFP). Enjoy. Or not. Whatever.

Ballard receives second award in as many days for Being Gangsta

"While many Panthers have distinguished themselves on the ice this year, none has done so in such a manner that exemplifies the qualities of Being Gangsta so much as Keith Ballard," Flowers said. "To paraphrase Jeru the Damaja of the Gang Starr Foundation, 'he dictates the flow of play like Fidel does his nation.'"

Flowers continued: "Beyond his contributions to the spirit of gangstrosity on the ice, Ballard further provides a much-needed role model to those wack kids 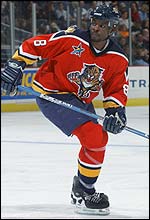 wandering the halls of BankAtlantic Center dancing with their shirts off."

The recipient of the Inaugural Charlie Flowers Memorial Award Trophy for Being Gangsta was Peter Worrell, whose singular triumphs in the field of gangstronomy necessitate that Worrell holds the position in perpetuity, thus leading to the creation on Tuesday of the Re-naugural title.