AIR CANADA CLUB AT TORONTO PEARSON AIRPORT -- Stranded here in the Great White North where I hope to be headed south in a few more hours of fun at Pearson Airport.

Special thanks to USAir for stranding me; honest thanks to Air Canada for stepping in and putting me on a flight to Miami.

Anyway, big news around the Panthers today is that they have agreed to a multi-year deal with FSN Florida with the regional sports network agreeing to cover 70 games next season.

The contract only called for 65 this year, and that's what FSN plans to give you.

So, more games and likely more of Goldie, Denis, Craig, Frank and Allison.

Hope the Panthers got some money for this. Not like there was much competition.

-- Thursday's game goes on at 7:30, BCS game or not. You have to think the Panthers could have changed the time on this to 6:30 or 7 to at least not put itself in direct competition with the college 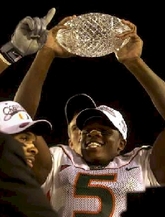 football championship being played right down the road, but Michael Yormark told me they didn't want to do that.

The Panthers should have never scheduled this game in the first place. The BCS championship game was going to be a bigger draw even if it didn't have an in-state team playing for the title. I'm thinking the team forgot there was a second 'Orange Bowl' game and didn't plan on needing to ask for the day off.

Regardless, this is probably a lost home date for the Panthers. Over/under on actual attendance tomorrow? I'm setting the bar at 8,000. Let me know if I'm high or low. I'm betting it's lower.

-- Since FSN dumped television coverage of tomorrow's game (because of the BCS conflict, duh), I will be going LIVE! from the Big Billboard sometime around 7. We'll talk hockey, a little football and whatever else comes to mind.

What, you thought I was going to bail on the Panthers because of some college football game? For shame.

-- Craig Custance, former Thrash beat writer and longtime friend to The Pond, put together a number of ways the NHL can save the All-Star Game for The Sporting News. Check them out here. And tell him G sent ya...