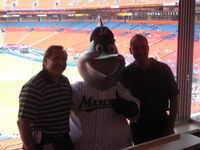 The Panthers are about to take on the Islanders, with a few members of the Florida Marlins coming to pay a visit.

Judging by what the crowd looks like, the Fish should feel right at home.

The Marlins and the Panthers began their run down here as brothers of a sort as then-Marlins owner Wayne Huizenga parlayed his baseball success by bringing hockey here in 1993.

Of course, Wayne parted ways with both of those franchises, but I think it's good for both the Marlins and Panthers to do a little cross-promotion. It can't hurt either.

Pitcher Scott Olsen has been known to enjoy his hockey, but I would guess he's probably a Capitals fan these days.

-- Speaking of cross promotion (and yes, I know this story is a couple days old), the Panthers and Nets have teamed up for what's being called a 'Snowbird Ticket Exchange.' Basically, season ticket holders of the New Jersey Nets basketball team can attend Florida Panthers games when they are down here clogging up our highways, and vise versa (honestly, sounds like a better deal for fans of the Netropolitans).

-- Winger David Booth and goalie Tomas Vokoun were back in the lineup Thursday after both missed Tuesday's game in Toronto with illness. Booth had been out since Saturday's game against the Islanders in New York.

Booth says he wasn't suffering from the flu, but the virus he caught brought him ''the most pain I've ever been in. I was pretty miserable there.'' Upon returning from Toronto on Wednesday, Booth skated for about an hour, then was on the ice early Thursday.

''I felt fast, but my endurance may not be where it needs to be,'' Booth continued. ''Maybe I need to keep my shifts shorter.'' 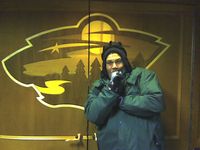 -- Only a few members of the Panthers were brave enough to wear their usual post-practice uniform of shorts with sandals on Thursday, most bundling up against the unusual South Florida chill.

Pete DeBoer has spent most of his life in Canada, but even he was looking for warmth on Wednesday when temperatures in western Broward dipped below 40 degrees.

''I was running around the house looking for the furnace so I could turn on the heat,'' DeBoer said with a laugh.

''The guy was telling me 'there are no furnaces in these houses.' So what, you have a heating element in the air conditioning?

-- Defenseman Jassen Cullimore took three stitches after being struck by an errant puck Tuesday in Toronto. Cullimore was hit just centimeters from his right eye, but was OK. He was back on the ice moments after being stitched up.

-- Jay Bouwmeester is Panthers' defensive player of the month.

Perhaps for the last time. 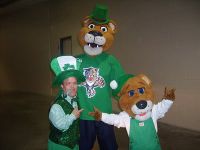 -- Don King just dropped the opening puck wearing his custom Panthers jersey. He stood on the ice during the anthem as well, waving his handful of mini-flags (next to Mini Stanley, of course).

Only in South Florida, baby.

-- The team has taken its own name off the scoreboard, replacing the small 'Florida Panthers' billboard with the name of a cable provider who will remain nameless. Of course, with the crummy resolution on these scoreboards, I wouldn't brag about it being their 'Vision.'