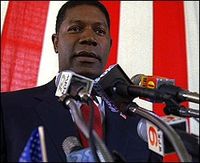 Happy Monday to you, a day off for many I'm sure. The Panthers decided to take today off, so there isn't much to report today.

The Panthers are coming off a second loss to Washington in just over a week, the loss snapping Florida's three game winning streak.

Hard to believe, but the Panthers have yet to win four straight this season. The loss also snapped a five game winning streak at the Billboard.

As for last night's scoreboard watch, Florida's loss didn't sting so badly. Carolina won to pull within three points of the last playoff spot, but the Canes beat Buffalo so the Panthers stay tied for seventh. With Montreal losing to the Luongos and the Rangers losing to Philly, Florida remains just two points out of fifth. Philadelphia is five points up in fourth.

And, we should probably congratulate the Capitals for a second straight Southeast Division championship. The Panthers are not catching them now.

-- The Penguins fired Michel Therrien last night after the Penguins played yet another bad game in Toronto on Saturday night. Therrien, who led the Pens to the Stanley Cup Finals last season, had been rumored to be on the hot seat in Pitt since the begining of the season. Dan Bylsma is the new bench boss in Steeltown, coming up to the big leagues from the Scranton branch.

Former Panther Tom Fitzgerald, the team's director of player development, is moving down to ice level to be an assistant to Bylsma. The Penguins have an afternoon game today against the Islanders. It looks like Bylsma and the Pens get their first win together.

-- Today's Schedule -- And who the Panthers Will Be Rooting For

Pens@Isles, 2: Panthers have to root on the Isles just to keep the Pens at bay. A Pitt win, and the Pens are three points back.

Stars@Jackets, 7: No interest, although both are playing pretty good.

Rangers@Blues, 7: Rooting on the Blues. Panthers are two back of the Rangers -- who looked horrible yesterday at home against the Phillies.

Sens@Preds, 8: No interest, although everyone loves the Preds. They are scrappy!

Thrash@Kings, 10:30: Have to think the Thrash gets rolled after taking down the Ducks last night. Atlanta can't do it twice.