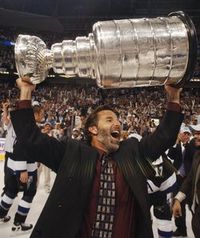 BOSTON -- The Rangers got a new infusion of emotion today, firing Tom Renney and bringing John Tortorella out of the television studio to be their new coach.

Tortorella, you may remember, used to coach the Tampa Bay Lightning. And he doesn't like the Florida Panthers (well, the management) all that much.

Torts would make his debut behind the Rangers bench Wednesday at Air Canada Center.

His Madison Square Garden debut? Thursday against the Panthers. Hope they do some kind of media scrum at MSG Thursday morning. I would wake up early for that. Seriously, I would.

-- With Renney out in New York, that means all four coaches who participated in the European kickoff have been fired. Tampa Bay was first with Barry Melrose, followed by Ottawa's Craig Hartsburg and Pittsburgh's Michel Therrien.