Rats Redux ... Don't Call it a Comeback, They've Been Thrown for Years

We haven't seen rubber rats in large numbers on Florida ice in quite some time, although the rubber rodents are definitely making a comeback.

Sure, the NHL came up with a rule to block the practice of throwing objects onto the ice during a game soon after the Panthers' 1996 run to the Finals were over. That doesn't mean people haven't been doing it in smaller numbers since.

We've seen a rat or two fly onto the ice after goals in the past decade, but most know it's a practice that could cost the home team. Yes, the refs could call the Panthers for a two minute delay of game if it were to get out of hand.

But there is no delay after a game is complete. Lately, more and more rubber rats have found their way to the ice following Florida victories. Saturday after the Boston game, more than two dozen hit the ice. Some were small, some were big. 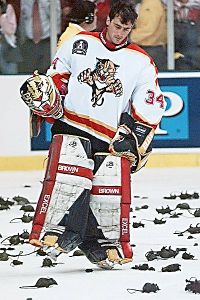 Boston's Mark Stuart doesn't seem to like the rekindled rat passion in South Florida. As the Bruins were leaving the ice, a big rubber rat hit the ice right next to him. He spun around and with a look of disgust on his face, picked up the rat with his stick and flung it over the boards and back into the stands.

-- Panther fans won't get a chance to check out how far they can throw a rubber rat for some time. The team kicks off a weeklong road trip, five tough games with plenty of playoff implications.

Can the Panthers survive it? We'll see.