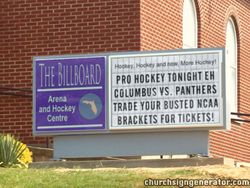 The Panthers are back on the ice, heading down the back nine of a five game homestand. Florida is 1-1-1 so far, with a win over Toronto on Thursday after losses to Tampa Bay and Washington.

Columbus is here, which means Jeff Rimer is in the house.

Florida needs a win here tonight, what with there being real estate that needs to be made up. But the Jackets need a win as well. Columbus is in the thick of the postseason fight, the Jackets trying to reach the playoffs for the first time in franchise history.

-- Nathan Horton was on the ice this morning as promised, and Pete DeBoer says there's a possibility he could play tonight if the doctor clears him. But, DeBo warned, Nate has only participated in one practice (and that was a morning skate) in the past few weeks so he said Horton was 'doubtful.' He does expect him to be back Monday for the red-hot WhalerCanes.

I wouldn't be surprised if Horton is in tonight, but don't expect him to be.

-- Stephen Weiss missed today's skate because he wasn't feeling good. Weiss is expected to be back.

-- Same lineup as Thursday; so, Steve Eminger and Nick Tarnasky in for Nick Boynton and Anthony Stewart.

-- Friday's Games (and how they affected the Panthers): Well, the Panthers remain a point out of the playoffs, but now it's Montreal in eighth and not Carolina. The Hurricanes storm back to beat the Islanders and jump into sixth. Carolina leads Florida by three. Pittsburgh also picks up ground with a win over LA, but the Sabres lose again and fail to pick up anything. 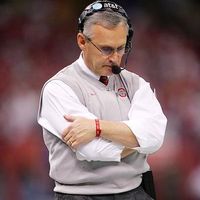 -- Saturday's Games (and who the Panthers would be rooting for if they weren't so busy figuring out if the nickname 'Blue Jackets' represents a bug, something to do with the Civil War or a garment Ohio State football coach Jim Tressel would cut the sleeves off and wear on the sidelines.)

Maple Leafs @ Canadiens, 7: Hockey Night In Canada offers up a big one for the Panthers. If Florida wins and Montreal loses in regulation, the Canadiens would find themselves on the outside of the playoff race after being in first earlier in the season.

Sabres @ Rangers, 7: Panthers have four point lead on Buffalo, so they root for the Sabres tonight to keep the Rangers within arm's length.

Capitals @ Hurricanes, 7: Carolina has won seven straight at home, but Washington is playing good again. Wouldn't be surprised to see this one go to overtime.

Blue Jackets @ Panthers, 7: Jeff Rimer hasn't called the playoffs in quite some time, so the Panthers are naturally rooting for their former TV voice to get that chance.

-- The Standings (presented by the Cleveland State Vikings and courtesy of TSN.ca/nhl)