Capital Win ... Jay Bouwmeester Speaks ... Will He Stay, Will He Go? 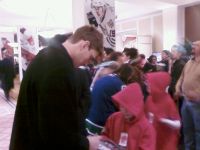 WASHINGTON -- Big bounce back win for the Panthers today, Florida trouncing the host Capitals 6-2 just 24 hours after losing 7-2 in Newark.

Florida gets four goals in the first period and rolls to a nice win. Alex Ovechkin was held in check by Craig Anderson and the Panthers, although he got a late one when Anderson couldn't hold onto the puck and it went over his head and into the net.

David Booth left the game after being run into the boards and he didn't look too happy afterward. He's probably out for Atlanta.

Good news though, is that Cory Stillman should be back. He skated before the game and told me he's not only tying his shoes, but ''wearing my dress shoes.'' That, friends, is a step in the right direction.

Jay Bouwmeester spoke to us after the game about his future in South Florida. Nothing earth shattering here. Bo, a pending free agent, says he hasn't thought about whether he'll still be here in a few days (hours) and adds he doesn't know what's going on with his status.

Bo was the game's top star after getting a goal and an assist.

''I'm on the road, you don't see anything, don't read the paper or anything,'' Bouwmeester said. ''I don't think you worry about it. This time of year, everyone is in a different situation but you know anything can happen. You can't worry about it.''

''We're doing well, and obviously I'd like to be here to see what we can do, make a run at it. 'Whatever happens, happens. We'll see.''

How would you feel about being traded?

You have a lot invested in the Panthers. Enjoying this right now? Is the franchise going in the right direction?

''It's been fun aside for the past couple of games where we didn't play very good. We've been solid, it's been fun. It's always better to win and it's been a long time coming I guess. There is some direction here now, and that's huge. Everyone is buying in.

''We don't have the most talented team, but with everyone chipping in the way we play, we can hang in with anyone. It's rewarding when it's like that because everyone is contributing. We kind of spread it around.''

-- And for you conspiracy theorists out there: Bo's travel bag looks just like all the others. Most of the players have a blue duffel with the Reebok logo as well as Florida's leaping cat. Except for Bo. Well, he has the Reebok logo. No cat in sight.