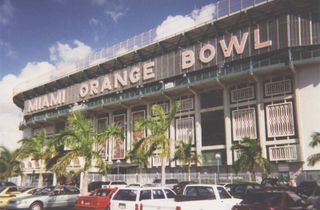 Big news around the Panthers this morning is that after the Miami-Dade commission voted to approve a new ballpark for the Marlins on the hallowed site of the Orange Bowl, they also offered to build the Panthers a new arena nearby.

The Panthers were apparently shocked by the commission's generosity, but said they didn't want to be called the Miami Panthers and politely declined the offer.

-- Big loss for the Cats last night at the Billboard, but hey, it could have been worse. The offense is still sputtering, and it took a 5-on-3 chance for the Panthers to get the tying goal and at least salvage a point out of it.

Going to be a tough roadie, as the Panthers rarely do anything good in Buffalo, and having to play the Sabres and Flyers on successive nights is downright brutal. Who knows what will happen in Dallas on Saturday.

Panthers can only hope Montreal continues to ''stink on ice.'' Florida isn't exactly lighting it up, losing six of the past seven. Playoff push?

-- Monday's Game (and how it affected the Panthers): Florida loses 3-2 in overtime to the Hurricanes. Has same amount of points as No. 8 Canadiens but one fewer game.

-- Tuesday's Games (and who the Panthers would be rooting for if they weren't so busy looking for something to do in downtown Buffalo. And good luck with that.)

Wild @ Rangers, 7: Realistically, there are only a handful of teams the Panthers could catch in the east. The Rangers are one of them.

Thrashers @ Canadiens, 7:30: Montreal has lost five straight and if that streak hits six against a team from Georgia, the locals may riot. Florida is hoping no one gets hurt.

--The Standings (presented by Tim Hortons, the Century Grill in Buffalo, Duffy's in Amherst and courtesy of TSN.ca/nhl)