PITTSBURGH -- Just got back from lunch with the radio and television voices of the Panthers, a rare day in which all of us had some variation of the same salad.

Yes, we're in Pittsburgh -- home of really tasty vittles -- and we ate salad in the hotel lobby bar.

Well, Pete DeBoer took the tasty route last night in the Steel City, saying he had a Jerome Bettis special, an Italian sausage sandwich that is battered and deep fried. ''I am paying the price for that right now,'' DeBoer said.

-- Speaking of deep friend sandwiches, funny story from last night: Cousin Paulie took me out to a place in Ohio where the owner became an ordained minister just so his patrons can smoke while playing pool and not watching hockey (did you know Dish Network offers Versus, but as an upgrade? An upgrade this place didn't have).

Apparently the Ohio smoking laws don't apply to churches and this guy says his joint is basically his church. Pretty original. And pretty hazy.

-- Keaton Ellerby was brought back up from Rochester just in case Jassen Cullimore has to rush home to be with his expectant wife. Saw Cully on the elevator a few minutes ago, so, he's still here. For now.

-- Mike Van Ryn is done for the season after suffering another injury. Tough couple of years for Ryno. 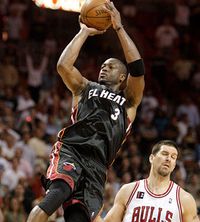 -- Monday's Games (and how they affected Los Panteros): Carolina beat the Rangers 3-0, so the Hurricanes skip ahead in line -- but at least the game didn't go to overtime. Florida still has two games in hand on Carolina. Montreal didn't play, but certainly shook things up as Guy Carbonneau was fired and replaced by GM Bob Gainey.

Sabres @ Flyers, 7: Sabres are three points back from a playoff spot so with a win they don't get in. I would say Florida actually roots for Philly; going to be hard to catch them for the fourth seed (yes a FLA win and PHL loss closes the gap to two, but Phightin Phils still have two games in hand). Buffalo being slowed isn't a bad option.

Panthers @ Pens, 7:30: Florida really enjoys watching the Sid and Malkin show. So, naturally, the Panthers root for the Pens in this one. Pittsburgers (with cheese and extra pickles) have won six straight. And the new arena is going up as we speak. Lot of iron.

Caps @ Preds, 8: If Florida can win tonight and the Preds topple the Caps, Florida is eight points back of first in the Southeast. Sure, it's a near impossibility, but if Florida can put up the kind of run the Caps did last year at this time, nothing is out of reach.

-- The Standings (presented by Jerome Bettis Grill 36 and courtesy of TSN.ca/nhl)