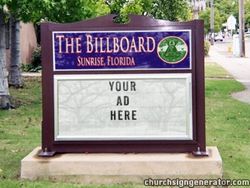 The good news for those driving along the Sawgrass Expressway is that the new 'Vegas-style' marquee is up and operational in front of the Billboard.

Good news if you like ads for insurance, real estate, Dutch beer and the lottery.

If you don't, well, just keep driving. You aren't missing anything.

-- Nathan Horton didn't partake in the pregame skate, so he won't play tonight. Will try and get an update on his status for Monday as we go.

-- The Panthers just told me that the NHL is lifting the NHL exclusive for Monday's game against the Carolina Hurricanes, although the only place to watch it will be on Center Ice.

The team says since neither Fox Florida nor Fox Carolina is picking up the game (too late to do so), the broadcast will be the spartan in-house camera angles with Randy 'Ma! The Meatloaf!' Moller and Billy 'I Beat the Bruins' Lindsay doing the radio simulcast.

I've said it once, I'll say it again: The Versus exclusive needs to go. It's a joke. And it sure doesn't serve the fan. It serves only one interest and that's marginally boosting the ratings of a network the league probably shouldn't be on in the first place. 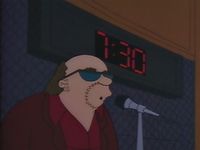 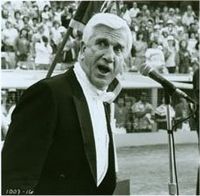 His previous longest was 1:41, set Thursday night against the Maple Leafs.

-- Tonight is Dillard's night at the Billboard, the team apparently honoring the Fort Lauderdale High School. They do share the same nickname, after all. 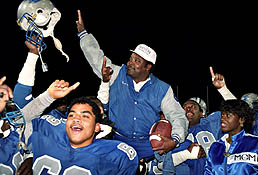 The shot at right is of the late, great, Otis Gray.

To you, Mr. Dillard.

He says hello to everyone.