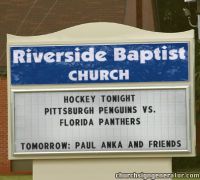 The Panthers are back in the house, home for the first time since Feb. 21.

The Pittsburgh Penguins are in town, just in time for the new signage in front of the arena. Vegas style marquees? Looks like they saved some money and bought a used sign. But that's just me.

Went to the office today and found a box addressed to me from the Panthers. Wondering what was in it, I opened it.

Why would the Florida Panthers send me a black rubber rat? Honestly, I shrieked. If anyone still worked at our Pembroke Pines office, someone would have been startled. Luckily there was no one around and I was able to hide my embarrassment. Good thing no one knows about this.

-- According to the Pittsburgh Post-Gazette, Sir Sidney is back in the lineup for the Pens today. According to this report, Crosby is playing with Chris Kunitz and Jordan Staal.

-- Spoke with Jay Bouwmeester today about remaining with the Panthers. As usual, Jay was quite forthcoming. I actually found out that he plans on going to Publix today because he didn't go yesterday. He says he was just hanging around the house yesterday and really wasn't worried about being moved. In fact, he said he didn't think it was going to happen. And, for the record, he was not packed up and ready to go just in case. ''That doesn't take too long anyway,'' he said.

He also said ''funner'' for like the fifth time in the past month, and added that there is a light at the end of the tunnel with the Panthers. Says he's enjoying this playoff run.

-- Also spoke to Nick Boynton. He didn't want to talk about the altercation with Pete DeBoer, but said if Pete says all is well, all is well. He did say he was happy to be back, happy to remain with the Panthers because ''I really like everyone here. This is a good situation to be in.'' He says he's been skating since Monday.

In a delicious twist of irony, when Nick went to practice with Rostislav Olesz at Incredible Ice on Monday, the only right handed stick available to him (without going to the pro shop and dropping a couple bucks) was Pete's practice stick.

-- Guess what? Also spoke to new Panther Steve Eminger today. Seems real happy to be with the Panthers and is excited that JM and Pete seem to have such faith in him. Because the Lightning's d-corps are more like a d-corpse, Eminger got some great on the job training this year. It should serve him well with the Panthers. Eminger will sport the Double Nickel, the first player to wear 55 since Ric Jackman (who was acquired by the Panthers on deadline day 2006).

Other notable Panthers to wear No. 55? Ed 'JovoCop' Jovanovski was the first, followed by Igor Ulanov (acquired in the Pavel Bure dump), Sean Hill and Jackman.

-- Puck Daddy grades each team's trip to the trade deadline, giving your boys in blue and red a B grade. I would agree with this.

The thought process for GM Jacques Martin was clear on Jay Bouwmeester: We couldn't fleece anyone, so we're going to make the playoffs with him and hope that those warm fuzzies convince him to stay. You almost want to hold off on a grade until you see if that works, because if it does then Martin played this right.

Eminger logged a lot of minutes for the Lightning, and his addition adds a little flexibility to the blue line. This team remains one significant injury up front from being dead in the water, but Martin's betting chemistry and momentum overcome offensive deficiencies. GRADE: B, with a dash of Incomplete.

-- Last night's games (and how they affected the Panthers): Florida gets some help as Carey Price and the Habs are manhandled in Buffalo. Keeps the Canadiens right within reach. Florida has two left against Buffalo including a game there next week.

Rangers @ Islanders, 7: Panthers are ahead of Rangers and Islanders aren't real good. So, Isles.

Flames @ Flyers, 7: Olli Jokinen makes his debut in Calgary and does so in Philly. In his last game there with the Panthers, he scored the overtime winner. Panthers are rooting for Flames because they really like Olli and Mike and don't want to see Flyers get two more.

Pens @ Panthers, 7:30: Panthers are 1-0 against Penguins this season, so the Panthers would like to see Pittsburgh tie things up. And they really like this Crosby kid. So, have to think Florida would be rooting for Penguins in this one. Naturally, of course.

-- The Standings (presented by Paul Anka, Primanti Brothers and courtesy of TSN.ca/nhl)