Going -- Over the Edge 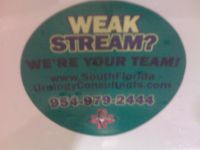 ATLANTA -- Been 'holding' onto this one for a few days, but thought I should share.

In some arenas, the team's logo is considered sacred. If it's on the floor inside the team dressing room, no one is allowed to walk on it. That used to be the case with the Panthers as well. Some still refuse to walk across the large carpeted logo of the Florida hockey club that sits in the middle of the locker room.

But inside the arena, the rules change.

In Sunrise, fans are allowed to urinate on the Panthers logo. Actually, many don't have much of a choice.

Inside the urinals in the men's rooms on the lower level of the BankAtlantic Center are advertisements for a local urologist. Weak stream? I thought it was an ad for an internet company. But whatever.

Many of us fellas have seen advertisements in rest rooms for years, even some radio stations (560 WQAM) have placed ads in urinals. Believe it or not, it's probably a good -- if kind of unsavory -- place for an ad. Eyes are focused, so to speak.

But the team's logo inside of a urinal? In their own arena? Only in Sunrise.

Spoke with Michael Yormark yesterday while driving from Baltimore to Philadelphia about this, and basically, he said the team really didn't think much about it. They sold the ad to the local doc -- who as part of the official team medical staff is granted use of the team logo at right -- and he placed it on his decals. Which happened to end up in urinals around the arena.

Some have told me they don't think this is news, considering that teams allow their logo to go on various other pieces of merchandise that could be looked at as 'disrespectful' to the team crest. Garbage cans, door mats, car mats, the like. You can wipe your feet on a Panther logo anytime you want, just pay the $15 for a floor mat at the team store or Home Depot.

But only in Sunrise can you 'take aim' at the leaping Panther. The logo may be small, but that only makes for an interesting target. I'm sure opposing fans get a kick out of going to the restroom and relieving themselves on the Florida mascot.

Say what you want about all the ads inside the Billboard, but in this market, those ads help cover up all those empty seats. I don't like it, but it is helping the hockey team remain viable in the National Hockey League.

I think the Panther logo was put on these decals innocently; the doc probably puts that logo on all of his ads. But someone inside the organization made a mistake by allowing them to go into the urinals. This would have been an easy fix, although it would have cost some money. Which is one reason why it was allowed to happen.

It's probably too late to have this fixed for the season finale come Saturday, but it would be nice to see some new decals -- minus the logo -- in place if this team makes the playoffs. Hear those Boston fans like their lager. Which means plenty of trips to the bathroom.

And no weak streams.