Jacques Martin in Trouble? Um, No 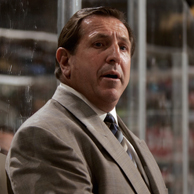 Our good friends from Canada continue to speculate that Jacques Martin is in danger of losing his job as general manager of the Florida Panthers.

Their theory: Owner Alan Cohen is upset that JM the GM didn't get anything good for Jay Bouwmeester at the trade deadline. Because of that, if the Panthers don't make the playoffs, Florida could be looking for a new GM.

Yes, I'm sure Alan Cohen doesn't like to think about another playoff-less spring here in west Broward County, but he has told me on numerous occasions that he likes what he sees in the direction the franchise is taking. Sure, they are baby-step small, but they are forward steps regardless.

And he never has anything bad to say about Jacques Martin. Mr. Cohen says he feels secure in knowing that JM is running the hockey side of things, and respects his opinions on this game.

Did JM err in not trading Jay? Yes. Would trading Jay have been a mistake? Probably.

JM and the Panthers were in a no-win situation at the trade deadline. JM was in the worst position of any of his peers and he did what he thought was right at the time. No deal blew him away, so he stood pat and decided to go forward with a team that was looking pretty good in the playoff race.

Did he know Jay and the Panthers would tank in the following 10 games after the deadline? He surely did not. If he did, things would most definitely have been different. Note, I do think Jay and the Panthers have turned things around despite Friday's result, although that 10 game stretch may turn out to be a killer.

And, one might want to know, Alan Cohen was pretty happy Jay stuck around. This team still has a good chance of making the playoffs this season. Let's just wait before we start digging those graves, eh?

-- You all doing the technology thing? I'm going to give twitter a try. Give me a shout. Or whatever twitter does.