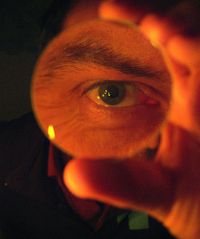 ATLANTA -- Greetings from the Peachtree City, or whatever the heck Atlanta is called. It's a glorious day here, the sun shining, just a hint of a breeze.

Went out for a nice walk, although I doubt I put a dent in the BBQ that Steve X. and myself threw down for lunch. On the bright side, I probably won't eat dinner.

Well, that's probably not true either.

This could and very well just may be the final road game of the 2008-09 season for your Florida Panthers. The team took today off and will return to the ice Thursday morning at Philips Arena just blocks from the team hotel, the world's biggest aquarium and the World of Snapple.

-- Spoke with coach Pete DeBoer today and he continues to contend that if the Panthers win their final two games, they'll be a participant in Lord Stanley's postseason.

DeBo said he doesn't know who is going to play in net tomorrow night, and I asked if him debating this at this time of year means he's not real high on Tomas Vokoun. He said don't read too much into it.

"It's not about individual play,'' he said. ''I've said this for weeks; It's about getting wins. We have to be better than the guy at the other end at all positions. I'm not saying I will or won't go with him. I just want to think about it for 24 hours. It's just like D pairings, line combos.''

"That was a high power team with a lot at stake. We went in there and executed our gameplan to perfection. Smothered them for long period of time, created some chances. Did a lot of things right. Ninty-eight out of 100 game like that, you get rewarded with points. We didn't. I'm not going to make wholesale changes.''

-- DeBo also said the Kamil Kreps should be OK for tomorrow as long as his flu bug was of the 24 hour variety. Says Kreps got through yesterday's morning skate, but got worse as the day went on and that's why he couldn't go.

-- Uh oh, there's some competition in the Florida Panthers online webophere (is that a word? I don't think

so, but I like it.) One Michael Yormark now has his own blog on the Panthers website, giving a little insight into the business doings of the hockey team down at One Panther Parkway.

Now, I don't expect him to reciprocate and link to this side of the web for various -- and obvious -- reasons, but I invite you to head down to Sunrise via the internet and see what Mr. Yormark has to say. Enjoy.

-- Tuesday's Games (and how they affected the Panthers): Well, the Rangers took care of the Canadiens and that may turn out to be good for the Panthers. Actually, who knows. The Panthers losing in Philadelphia kind of messed everything up for them, although there is a chance. Florida just needs to win out and Montreal can't get another point and the Rangers can only get one.

Sabres @ Maple Leafs: Panthers don't need any more complications. Buffalo losing would be one less thing to worry about. If they're worried about Buffalo at all.

-- The Standings (presented by Fat Matt's BBQ in Atlanta and courtesy of TSN.ca)