The Panthers Have Fallen; Can They Get Back Up? 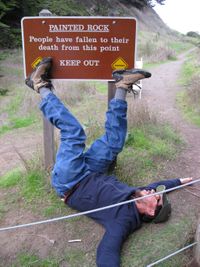 PHILADELPHIA -- Truth be told, the Panthers played a pretty good game against the Flyers Tuesday night. They controlled the puck, worked down low, kept the home crowd muttering ''not these darned Panthers again.'

OK, maybe they weren't muttering that, but, like a few weeks ago, the Panthers came to Philly and outplayed the Flyers. Only difference was the final result.

The bottom line: Anderson won here, Vokoun didn't. Their games, however, were quite similar.

Vokoun, like Anderson here a few nights ago, probably could have given up more than two.

Both goalies left up some juicy rebounds and both were out of position a few times leaving the Philly crowd groaning when the Flyers couldn't connect.

The Panthers didn't get that kind of charity. If they were around the puck, Martin Biron was around to keep it out of the net.

It's been some time since the Panthers really played a stinker of a game, although the same can't be said for the team's offensive production. One goal against Johan Hedberg and the Thrashers on Friday; one goal against a Martin Biron who was in a funk.

Now here's the rub: How do the Panthers get back? They have two games left and really need some help to make the playoffs. Montreal needs one point to finish in front of the Panthers. Yeah, the Habs are in trouble. But don't you think they probably at least pick up one point in their final two games? How about the Rangers? All they have to do is win one of their final two games.

Can't blame missing the playoffs on losing to the Flyers. You can, however, blame it on the loss in Buffalo. The two on Long Island to a vastly inferior team. The back-to-backs against Tampa after Christmas. The third period collapse to Columbus.

There are a lot of places you can look to find those very valuable points. Florida may very well pick up four points in these next two games, but it probably won't be enough.

But, despite what you are going to read from people who don't know a lot about the Panthers, it won't be the same old story.

This team didn't miss the playoffs because of a lack of effort, nor a lack of heart or toughness as they did in the past.

No, the Panthers didn't make the playoffs because they just weren't all that good. They were a better team than in the past, but individually, not enough talent. Pete DeBoer squeezed what he could out of them, tried to push the right buttons, but in the end, he's going to finish ninth in the east. JM the GM will try to improve the team in the offseason, and will be going after some scorers. Has to be. He's going to keep his eye on the defense, but even without Jay Bouwmeester, that should be fine.

Florida's biggest problem this season was that it couldn't support its goalies when it really needed to. One goal is not going to cut it in the NHL 95 percent of the time. Sure, Vokoun should have made the save on Carter in the third. That was a bad goal to give up. But giving up two goals to Philadelphia through 60 minutes should mean a win -- at least a trip to overtime.

How big would one point look right now? It might have been the difference on the boys playing golf come Tuesday or postponing those tee times for another few games.

Will update things tomorrow when I get to Atlanta. Will be interesting to see if DeBo sticks with Vokoun or goes back to the bullpen. He looked kind of disgusted tonight.