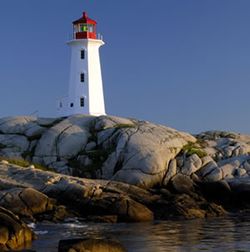 The Panthers will hold training camp in the small town of Port Hawkesbury, Nova Scotia, before opening their preseason schedule against the Ottawa Senators on Sept. 15.

So, that means no trip to western Canada for the traveling Cats. And that (hopefully) means a lot of lobster and clams for me.

Florida will bus over from Port Hawkesbury (population: 3,922) and play the Senators at the Halifax Metro Center (capacity: 10,595).

The Panthers say they are still working on the rest of the preseason schedule, but want to get this out since JM the GM is in Halifax to announce this tilt and get those tickets out to the peoples.

Florida will hold training camp here the next three seasons; looks like we're done with Vail.

“We are excited about the opportunity to open our training camp in Port Hawkesbury and to play an exhibition game in Halifax,” Martin said in a statement. “This is an ideal situation because it gives our team the chance to train at a great facility and allows our players the opportunity to bond together early in training camp. At the same time, it will provide the residents of Port Hawkesbury and Halifax the chance to see NHL hockey in their hometown setting.”