What a Night: Big Wins for Wings, Canes ... Schedules for Conference Finals Here ... And Another Frozen Poll 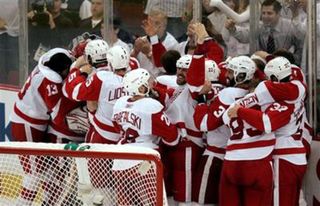 Well, that made up for Wednesday's dud, didn't it?

Both Detroit and Carolina won exciting decisive games tonight, with the Hurricanes doing it on the road -- and in overtime.

Scott Walker scored the game-winner for Carolina (Chuck Kaiton called it the prettiest dirty goal in NHL history on Canes radio) and a number of Bruins refused to shake his hand afterward.

Hard to blame them after what happened in Game 5 when Walker dropped Aaron Ward with one punch. Walker was fined $2500 for the hit but not suspended.

The Bs said it was a dirty shot since Ward hadn't removed his gloves yet. Anyway, he gets the goal and will probably never play for the Bruins.

Anyway, great game for the Hurricanes and aside for the non-handshake, the Bruins seemed to be gracious in defeat. Boston goalie Tim Thomas seemed to give Cam Ward some nice words of encouragement, but you could see the crushed looked on the Bruins faces. They had high hopes.

As did the Ducks. Really have to feel for Jonas Hiller after he gave up a greaser for the decisive goal in Motown by knocking the puck in himself (Dan Cleary with the shot), and the Ducks never recovered. Crummy end to a great two rounds for Hiller. You could really see the pain in his face.

Give Anaheim plenty of props for sticking with this thing from the start. They took the game to San Jose and did the same at times with the Red Wings. Detroit was up 2-0 tonight and playing on home ice, but in the final five minutes, were a greasy goal against Chris Osgood from going from defending Stanley Cup champs to simply the reigning champs.

At the end of the day, however, the Wings continue to defend their crown. And good for them.

Love this quote from Mike Babcock on the Ducks. Think there's a little respect there?

"What made this series so hard and what people don't understand, the people that have won know what it takes to win," Babcock said. "That's what made them so hard to get rid of."

As it stacks up, I went 7-1 in the opening round (missed on the Ducks) and 2-2 in the semifinals (missed on Chicago and Carolina). I was leaning toward the Hurricanes when the playoffs started (I thought it would come down to either Pitt or Carolina) but went with the heavy hitting Bruins after they skated past Montreal with complete ease. Oh well. Will have my picks for the Stanley Cup Finals by the weekend.

Leaning toward staying with my original pick of a Detroit-Pittsburgh rematch.

Last year was fun. Let's do it again.

-- The schedules have come out for the conference finals. Games will be on Versus or NBC. Enjoy.

-- So, who are your picks for the 2009 Stanley Cup Finals? Go ahead and vote for the matchup you would most like to see/figure we're all going to see below. And don't be ascared to comment below on why you want to see a certain matchup -- or why you would hate to see a certain team/player in the Finals.

Comments are fun! And they are free. Which is cool.