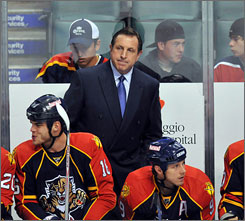 A highly placed source within the Florida Panthers organization confirmed Monday
morning that general manager Jacques Martin is going to leave the team to become the new
coach of the Montreal Canadiens.

Martin, 56, just completed his third season as Florida's general manager. He coached
the team for three seasons before being relieved of that duty last summer. Martin was
asked to stay on as general manager by owner Alan Cohen and Martin agreed, signing a
four-year contract.

What sort of compensation the Canadiens would give to the Panthers isn't clear, and it
is not known if Martin would personally have to buy out his own contract to leave. Cohen
and Martin -- who was scheduled to attend the team's development camp in Ontario on Monday
-- were not available for comment. According to a Panthers source, Martin is not at the development camp and is in Montreal.

Prior to coming to the Panthers, Martin spent parts of nine seasons as coach of the
Ottawa Senators, leading that team to the playoffs for eight consecutive years. He was
fired in Ottawa after the 2004 campaign after the Senators were knocked out by Toronto in
the opening round.

Martin was soon hired to coach the Panthers with Mike Keenan becoming the team's
general manager. After one season (and a Roberto Luongo trade), Keenan was fired and
Martin was elevated to the front office while also serving as the team's coach.

The Panthers did not advance to the postseason in any of Martin's four seasons with the
club, and Florida hasn't been to the playoffs since 2000 -- the longest current streak in
the league and second-longest drought in NHL history.

Randy Sexton, Florida's current assistant general manager, could be a candidate for the
main job and could at least run things on an interim basis as the draft is coming up later
this month in Montreal.

Joe Nieuwendyk, who retired as a Florida player in 2006, would have been a prime
candidate to replace Martin in the front office, but Florida's timing was not right.
Nieuwendyk is being formally introduced as the new GM in Dallas on Monday. Former Florida
assistant general manager Chuck Fletcher also recently took the GM job in Minnesota.

Florida has plenty of offseason business to take care of, with Jay Bouwmeester (whose
agent told The Miami Herald that he hasn't spoken to the Panthers in a long time) a
pending free agent on July 1. Backup goalie Craig Anderson and wingers Radek Dvorak and
Ville Peltonen are also free agents.

The Panthers also are in negotiations with restricted free agent David Booth -- a
third-year forward who led the team in goals this past season.