« The Rumor Mill | Main | Welcome to the First Monday of Hockey Summer ... Gearing up for the Draft ... What's Going on in Pantherland? » 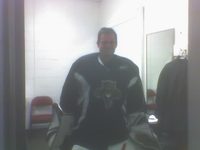 The Panthers lost a couple more good guys this week.

Pierre Groulx, the team's goalie coach the past two seasons, told me today that he was relieved of his duties as his contract was not renewed. Groulx, who is pictured at left as the 'Fake Eddie Belfour,' just got back from the team's prospect development camp.

He was informed of Pete DeBoer's decision on Saturday; DeBoer was the one who made the call and informed Pierre of his decision.

''This was my decision,'' DeBoer said. ''When I took this job, I inherited some coaches under contract. Guy Charron, Pierre, Mike Kitchen. The only move we made then was with Guy. The other guys we wanted to give a year, see how we worked together. We want to go in a different direction.

''Last year was the first year I had a full-time goalie coach. We want to go w

ith a part-time guy, more of a consultant. A lot of teams around the league have consultant-type goalie coaches. Detroit is one. Last year, I found sometimes there wasn't enough to do to justify a full-time guy.''

Pierre said he kind of saw this coming, but hoped things could be worked out. Pierre's wife Wendy recently gave birth to twins, the couple's first children. So, what we have here is a very good guy -- and a good coach -- with a young family looking for work.

He's confident in what he does and what he has done and feels he'll be back in the league somewhere next year. A couple of teams are looking for goalie coaches, and interestingly enough, the Canadiens fired their coach around the time they brought in one Jacques Martin to be their head coach.

I would bet JM at least has a meeting with Pierre sometime soon. Hey, they're both in the same area code.

''Pierre was very good at what he did and did a good job for us,'' DeBoer said. ''It's obvious he and Jacques have a very good working relationship. I'm sure that will continue.''

Pierre said he enjoyed his time with the Panthers and has no ill will toward the organization. He hopes they keep making strides and moving forward -- even though it appears they've been taking a few steps back this summer.

''I had a great time with the Panthers and wish them nothing but the best,'' Groulx said. ''I am disappointed they decided to make this move, but that's part of the profession. This happens to coaches all the time. I know we had pretty good goaltending while I was here, so I'm happy with that. I look forward to new opportunities and new challenges. I want to continue coaching in the NHL. It just won't happen in South Florida.'' 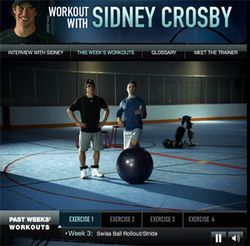 -- Strength coach Andy O'Brien is also leaving the organization, DeBoer telling me he took a job outside the NHL. A position, the coach said, was something Andy could not turn down. So good for him.

O'Brien, best known for being Sidney Crosby's personal trainer, had been with the Panthers since 2005. He helped run the developmental camp in Ontario that just completed.

-- DeBoer also said that rumors that the Panthers were going into a salary dump were not true. He says there has been no indication that the ongoing potential sale of the team is going to affect things too much, although the Panthers will likely see a lower payroll next year.

A lot of teams are going to be saying the same thing.

''Everyone is going to take a haircut this year just because of the economy,'' DeBoer said. ''Well, everyone except for Toronto, the Rangers, Montreal. Those kind of teams.''

-- While DeBoer looks for a new goalie coach and a strength coach, he says that's going to do it for staff changes for the coming year. That means Mike Kitchen and Jim Hulton will be back behind the bench next to DeBoer in 2009-10.