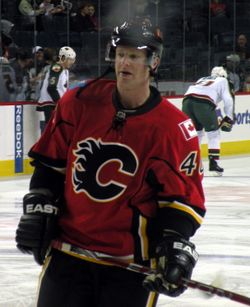 ON THE FLORIDA TURNPIKE - The Panthers just called and told me Jordan Leopold has been signed to a one-year deal worth $1.75 million.

Seems Randy Sexton was at the right place at the right time, sending Jordan's agent an email asking him ''what was up'' after seeing that Leopold hadn't signed anywhere yet. After Leopold's agent said his client would take a one-year deal, things started rolling.

The Panthers acquired the exclusive negotiating rights to Leopold on Saturday at the draft in exchange for Jay Bouwmeester's rights. Florida also got a third round pick out of the deal.

Here's what Randy and Jordan had to say about today's events:

''Sometimes these things take longer than you would hope. There was genuine interest in Jordan's part, genuine interest on our part. Had to work through the market, Jordan's family to decide what they wanted to do. I stayed in touch with his agent and sent him an e-mail today and said 'you haven't signed yet, what's up.' He called back, had a short conversation saying he had to talk to Jordan and wife. Then he called back and said 'here's the deal'.''

''Jordan turned down more money and longer term from other teams. That shows how much he wanted to play here.

''If you look at our defense now, we felt it was important to upgrade our mobility. I feel like we've done that. We're a mobile group now. We're excited about our mobility. Knock on wood, hope Bryan can play all year. That's like making a trade.

''We didn't make an offer initially, we just talked and looked at different kinds of deals. We just couldn't get it right, couldn't quite agree on things. I sent his agent an e-mail, asked if he would consider a one year, he said he would and to call him. It all worked out. I have a real good relationship with his agent.

''We are never done looking to improve. We're going to be relentless in our pursuit of finding good players. We're creeping up to where we were last year. Rest assured, we're not done. That doesn't mean anything is eminent. But we're not sitting back. We're not done.''

''The last number I had from agent was $2 million and one year. We always wanted him back, wanted a one year, he got two. Two million for one year was a bit much. That's it.

''We didn't make a two-year offer. Only a one. We made him an offer on a one year today, he took the security of the two year in Dallas.''

“You look at an opportunity to play, and I don't know if other teams were the right fit for my family. I'm happy, I'm excited and ready to prove myself and look forward to the opportunity.

''Things were pretty quiet this afternoon, don't know if that was good or bad. I had never been through free agency, and some teams were interested. Randy called and I had to make a decision. I had prior conversations with him, at the end, it was a pretty easy decision.

''Anyone is a possibility at any time. Other teams called, it didn't work out. This worked out well for both of us.''

''He was at his parents' cabin on in island in the middle of nowhere. We talked Monday, talked about a few things. It was positive. I just wanted to test the market and Florida was always in back of my mind. Randy called at the right time and it worked out.''