« Pierre Groulx to Canadiens | Main | The Billboard is Honored: BankAtlantic Center ranked No. 3 ... Another Rochester Move » 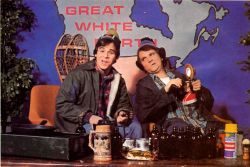 If the Panthers get off to another crummy start this season, well there's another excuse already built in: Another crazy preseason schedule.

As Randy Sexton pointed out, it's not a loony as the preseason Mike Keenan set up in 2006 where the team went to Puerto Rico and Detroit on back-to-back nights, but it's close.

Florida will open training camp by holding physicals in Sunrise/Coral Springs on Sept. 12; then they board a plane bound for Nova Scotia. The team opens workouts on the 13th, then plays Ottawa in Halifax, N.S., on the 15th.

From there, Florida will visit Ottawa (Sept. 16), the Montreal Martins (Sept. 17), Edmonton (Sept. 18), the Calgary Bouwjokinens (Sept. 20) and the Dallas Nieuwys (Sept. 22) before finally returning to South Florida for a game against Dallas at The Billboard on Sept. 23.

After all that, the team leaves for Europe a few days after getting back to South Florida to play a pair of exhibition games in Finland. The probably wore out Panthers open the regular season in Helsinki on Oct. 2-3 against Chicago.

Sexton said the team wanted to play seven preseason games, and the Edmonton/Calgary games had already been agreed to before the Europe trip ''popped up.'' So, they added the trip to Dallas so the west coast swing at least brought a game on the way home.

Should be a fun trip.

For whom, I have no idea.

-- Randy Sexton says he spoke to the agent for Ville Peltonen on Thursday and that it looks like Ville is not only not coming back to the Panthers next season, but probably will not play in the NHL either. As had been long rumored, it appears Ville Peltonen will play in Europe next season, probably in Switzerland.