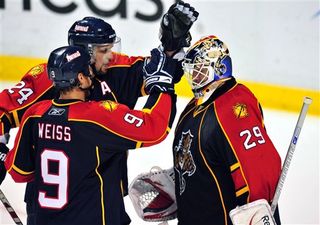 Tomas Vokoun now has some friends to spend his mornings with.

The Panthers are coming in one by one and working out at Incredible Ice in Coral Springs.

Vokoun had the place to himself the past few weeks; now, others have joined him.

Spoke a little with Leopold on Monday regarding joining the Panthers. Like he told us when he signed, much credit goes to Randy Sexton for revisiting Leopold after July 1. 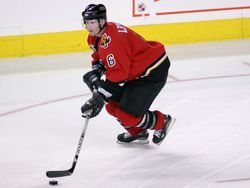 The Panthers had Leopold's rights until July 1, then he went free agent. The offers weren't there apparently, and Sexton called back and made one. And that's basically how Leopold signed with the Cats. He says he's excited about the challenge, and I think the Panthers are excited he's in a contract year. Should get his best. But, remember, he's been in the west his whole career. Takes a little adjustment moving east and seeing all these new teams.

“I’m an older guy on this team, which sounds funny to me,” said the 29-year-old Leopold. “On the back end one guy [Jay Bo] is missing and he logged a lot of minutes. But I think the rest of us can carry that weight, and we’re excited for the challenge.”

More on Leopold and the new-look defense in the coming days.

-- Stephen Weiss spent the entire summer in the gym in appears. "I'm starting to enjoy that side of the game,'' he said about his intense training. "I'm getting older, starting to really see those results.'' He also said watching other teams in the playoffs fueled his workouts throughout the summer. "I'm really getting 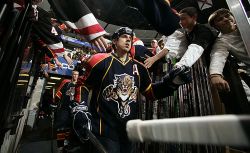 sick of these long summers,'' he spat. ''I'm trying to do something about it.''

He says his surgically repaired wrist is healed up, although he'll still feel some discomfort with it for another year or so. He says he couldn't lift for two months after the surgery, so ''I ran a million miles'' and ''did plenty of leg work'' while recovering. then he hit the weights like a mad man.

Weiss also said he played a little golf over the summer, kind of like this guy. Unlike me, however, Weiss doesn't suck. He says he shot a 73 at Plantation Preserve on Monday.

-- Nathan Horton appears to have spent plenty of time in the gym as well, although he's not bigger. He's  markedly smaller. 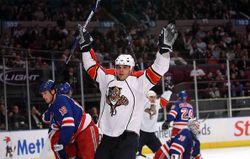 And looks a lot quicker and faster.

Word is he is clocking in at 205, about 10-15 pounds lighter than he played at last year. In past summers, Horton did NFL type training to get stronger. Now, it looks like he wants to play at a faster pace.

At any rate, Horton has shown -- again -- a commitment to his offseason training.

-- Anthony Stewart is no longer a Panther, that evidenced by him wearing a blue Florida practice jersey inside out (the stitching of the leaping cat still visible). The Panthers invested a lot in Stewart, and he 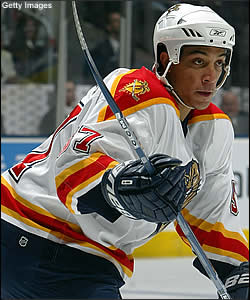 spent the entire season here last year before Florida decided to cut him loose during the offseason.

It seems Stewart invested a lot this summer. He looks huge. And fast. A change of scenery might be exactly what he needs to blossom as Panthers management had hoped he would do here. Maybe he'll become that player in Atlanta.

-- Tomas Vokoun continues to get his work in, and having NHL caliber players working with him will only make him better. Vokoun's reflexes look good, as does his footwork.

Like I said earlier, he looks to be in great shape.

He's moving around well although he has been giving up some big rebounds. But this is summer practice.

-- Coach Pete DeBoer is expected to be a guest of the Marlins tonight as they take on the Mets at Miami Gardens Stadium. Don't know if DeBo is throwing out the first pitch tonight or not, but he is expected to be tonight's celebrity to pull down the countdown number in left field.

More from the stadium later.

-- Too bad: No hockey at Olympic Stadium in Montreal. At least not this year. Go Expos.

-- More from TSN: Stephen Walkom is leaving his cushy gig to make a comeback as a ref...

-- James Mirtle does the stats and comes up with what we've been saying for years: The Panthers have had some pretty good goaltending over the past couple of years.

-- Saw this on PuckDaddy: The Wild's new jerseys have been leaked.

-- Speaking of new jerseys, no one around the Panthers seems to know anything about when Florida's new threads are going to be released. It's supposed to be this year.

-- Jim Balsillie sets deadline for him taking over the Coyotes.

-- Good baseball nugget from Clark Spencer. Seems Jack McKeon sees a lot of the 2003 Marlins in the 2009 Rockies. I said the exact same thing last night after watching them win a game in the 14th inning on a game-winning grand slam. They are a dangerous bunch.