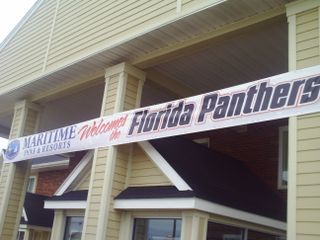 PORT HAWKESBURY, Nova Scotia -- The Panthers officially opened things up today with a pair of practices at the very nice Civic Center here in Port Hawkes.

Very friendly place here with a lot of Panthers banners hanging up on businesses and around the rink.

On thing that was funny to me was one of the banners said 'The Panthers are Coming' and had a picture of Jay Bouwmeester underneath those words. And it wasn't just a generic pic of Bo either; it was taken from the back, so it's nothing but his nameplate and No. 4.

That side of the banner was facing the wall, but I saw it.

--- Was good to see Bryan Allen out there and he's the focus of my story in tomorrow's Herald.

Allen missed all but two games for the Panthers last season, so when the team took the ice at the Port Hawkesbury Civic Center for the first day of training camp on Sunday, Allen was more than ready to get going.

After what seemed like endless months of rehabilitation on his surgically repaired knee, being able to get back on the ice with his teammates left Allen with a wide grin.

''It felt good to be out there and have that first day intensity,'' said Allen, who had only missed nine games in his previous two seasons with the Panthers. ''You have a little of that in the summertime, but nothing like training camp. We didn't really battle or anything like that, but it felt good. So far so good. I'd rather hit someone than get hit, and I'm excited to see how it feels in battle.''

The Panthers are going to closely monitor Allen's knee, and if feels anything strange – anything – he's been told to let the medical staff know.

''Bryan knows his body better than anyone so he has to keep us in tune with how he's feeling,'' said coach Pete DeBoer. ''He wants to get back. It's killing him to sit out. He just has to be honest with himself so we can set the right tone. He's real anxious. He's a character guy and he wants to be involved.''

-- Rookie David Brine couldn't believe it when he heard the Panthers were going to spend the start of training camp in Nova Scotia. Brine, who grew up in nearby Truro, had a number of family members as well as former coaches and teammates in the stands at Sunday's practice.

-- The Panthers are going back to their roots a bit by holding training camp in a typical small Canadian town. Port Hawkesbury, population 3,900 or so, doesn't have a movie theater or a mall. But the town does have a state of the art hockey rink, one complete with a large film room that DeBoer has already gotten plenty of use out of.

''It's fun to get to a small town like this, it's the grass roots of hockey,'' said defenseman Bryan McCabe, who was mobbed by kids requesting autographs after the workout. ''A lot of us are Canadians and grew up in an atmosphere like this. It's fun.''

-- DeBoer said Radek Dvorak, still in Czech Republic because of a family matter, should join the team next week in Dallas. Free agent defenseman Martin Skoula, on a try out, is having visa issues cleared and should be with the team next week. Defenseman Rory Fitzpatrick (groin) will skip Panthers camp and report directly to minor league camp in Rochester, N.Y.

-- The Panthers veterans will hold an intersquad scrimmage on Monday morning. The rookies will practice prior to that and then play an exhibition game against a local college team (St. Francis Xavier) on Monday night.

-- DeBoer on the start of training camp:

''I thought it was good. Yesterday was tough, reporting at 6:30 a.m. and testing and then flying across the country. They went through it real well this morning, are in great shape.

''Everyone seemed excited about getting started. That enthusiasm is nice.''

-- "We're here for business. We didn't get to where we wanted to last year. I think the atmosphere around here is workmanlike. If we consistently start making the playoffs and win some games, you might see a little more fun. The nice thing for me is that it's very businesslike.''

-- DeBoer on the third line that was so successful last season:

''We want to roll four lines and make sure all four are capable of chipping in and give us some goals. If you have an Olesz-Campbell-Dvorak line, that's a big strong line that skates well and forechecks well.

''They'll be pretty hard to play against. We wanted to get bigger and faster, and that kind of combination is intriguing to me because of how big they are.''

-- Bryan McCabe on what he thought when he saw Florida's preseason schedule of seven games in nine days: ''I thought it was a misprint.''

-- Sorry, no video today. I somehow left the camera on all night and when I went to use it today the battery was dead. But it's charging now, so we'll have plenty tomorrow.