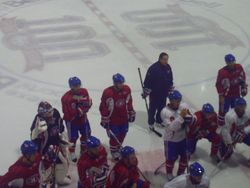 MONTREAL -- Jacques Martin just can't get the Florida Panthers out of his system.

Not only are the Panthers the opponent in his first home game as bench boss of the storied Montreal Canadiens, but the Panthers have also stormed his house and are crashing at Casa de Jacques.

That's right, the Panthers are staying at Jacques Martin's home while in town.

Of course, Martin happens to be living in a downtown hotel right now. You know, the same hotel the Panthers are staying in. For the record, JM the ex-GM is living in temporary quarters while his new place is renovated. Over/under on how many months it takes him to unpack the boxes?

I'm going with 'next summer.'

-- Spoke with JM this morning over at the Canadiens Practice Castle (one word: Stunning. OK two:        R 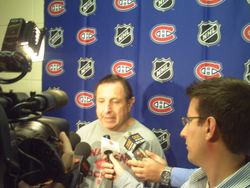 eally, really stunning) and he says he's not focused on the Panthers, instead he has to focus on what the Canadiens are up to.

He's stacking the lineup tonight against his former bunch, with most of the Montreal regulars going tonight.

Will have more from JM later on once I scroll through the tape.

-- Pete DeBoer, one of JM's best moves during his tenure in Sunrise, says he doesn't think Dmitry Kulikov will play a third straight game tonight. If Kulikov sits, the plan is to play him tomorrow in Edmonton.

In the tape I heard of DeBo (I couldn't be in two places at once), he said he would be OK with Kulikov going back to junior for another year because he believes in the coaching at Drummondville. ''I don't think he would take a step back in his development,'' DeBo said.

-- Will have a Nick Tarnasky update when I talk to DeBo later this afternoon.

-- We're back for Panthers GameDay LIVE! tonight around 7 p.m.

-- The Panthers made their first cuts of camp, sending Adam Comrie, AJ Jenks and Garrett Wilson back to their junior teams.