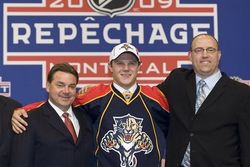 The Panthers had until 5 p.m. on Tuesday to get a deal done or Kulikov had to be returned to his junior team in Quebec.

This is very good news for the Panthers because it offers them a number of possibilities.

First, Kulikov can play for Florida this year if the team wants him to. That's the biggest deal. He could also be sent back to the Quebec junior league, but at least now the Panthers have that flexibility.

I don't expect Kulikov to last the season with the Panthers; if he plays in 10 games, the first year of his NHL deal kicks in which means he can be a free agent (see: Bouwmeester, Jay) a year sooner. But, it looks like Kulikov is going to get his chance to show what he can do at the NHL level. He will be on the opening day roster, he will get his nine games in the league. If he excels and the Panthers want to keep him up, they can. If they don't, he goes back to Drummondville.

The NHL hasn't officially accepted Kulikov's contract, but it is in the league office and it looks like everything is OK. Kulikov's agent wired the money to Kulikov's KHL team thereby securing the already negotiated buyout.

-- The Panthers also placed Jeff Taffe on waivers today. He'll be off to Rochester as soon as this trip is completed as long as he doesn't get claimed.