Changes to Panthers: Dominic Moore IN, Shawn Matthias OUT 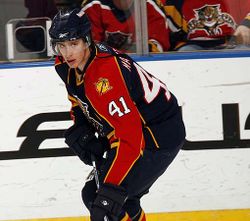 Not five feet from where Dominic Moore was sitting twirling his brand new Florida Panthers baseball cap sat Shawn Matthias' stall. Matthias had his pads and helmet sitting there all by its lonesome.

Matthias and his skates were gone, off to Rochester.

The Panthers returned Matthias to their minor league team on Wednesday, coach Pete DeBoer saying everyone within the organization is where they should be. DeBoer wants Matthias to dominate play in the AHL although my bet is he'll be back soon enough.

''He needs to earn his ice time and score some goals,'' DeBoer said. ''He had a good training camp but hasn't had a good season in the [AHL] yet. He needs to do that.''

Even with Moore on the practice ice Wednesday, the Panthers only dressed nine forwards. Radek Dvorak was out with the flu; Nathan Horton and Steve Reinprecht were out with undisclosed injuries. The Panthers are going to start playing the injury game now, making us guess on what's wrong.

So here's my guess: Reinprecht's foot is still hurting from getting hit with a puck last week and Horton has a sore knee. I don't know if that's true or not, but the Panthers can't argue it since they won't give us anything anyway. Horton was walking around the locker room on Wednesday, however, and nothing looks wrong. His ankles weren't swollen or anything, that's where I came up with the knee thing.

Moore says he's happy to be with the Panthers and feels this is a good fit. He's been watching the team since signing with them last Monday, so he knows he can only help. The Panthers were horrible in the face off circle Monday against the Lightning, so Moore will definitely be an upgrade there.

Florida's faceoff stats are just like most of the Panthers stats this year: Bad. The team is ranked 27th in the league currently, winning 46 percent.

''I've watched a lot of hockey over the past few weeks,'' Moore said. ''When I made the decision to join the team, it was because I thought it was a good fit for both myself and the team. The kind of game I take a lot of pride in is what this team is trying to build an identity around.''

-- Couldn't tell what was going on with the lines since only three were out there. How strange was that? Ville Koistinen was up on the top line as Horton's replacement.

Here's how I see things going: The Sawgrass Express stays the same as does the underperforming second line (which DeBoer basically said hasn't done much since the Chicago opener). The third line is now Moore's, with Dvorak and Rostislav Olesz on the wings. Gregory Campbell now becomes the fourth line center, piloting Kamil Kreps and Koistinen. Kreps can take faceoffs on that line when needed.

-- DeBoer also said that he hasn't decided if Scott Clemmensen will play Friday against the Flyers, but ''he's going to get [a start] soon.''